From Original Sin To The Eternal Triangle - Lessons From Central Europe

The non-biblical concept of original sin, as Claus Vistesen notes in this post, when propounded in its standard Obstfeld & Krugman textbook version refers to the situation where many developing economies who are not able to borrow in their own currencies feel forced to denominate large parts of their sovereign and private sector debt in non-domestic currencies in order to attract capital from foreign investors - as evidenced most recently in the countries of Central and Eastern Europe. Well, piling insult upon injury, I'd like to take Claus's point a little further, and do so by drawing on another well tried and tested weapon from the Krugman armoury, the idea of the "eternal triangle".

As is evident, the reality which lies behind the current crisis in the EU10 is complex, and has its origin in a variety of causes. But one key factor has undoubtedly been the decisions the various countries took when thinking about their monetary policy and currency regimes. The case of the legendary euro "peggers" - the three Baltic countries and Bulgaria - has been receiving plenty of media attention on late, and two of the remaining six (Slovenia and Slovakia) are now members of the Eurozone, but what of the other four, Romania, Hungary, Poland and The Czech Republic? What can be learnt from the experience of these countries in the present crisis.

Well, one convenient way of thinking about what just happened could be to use Nobel Economist Paul Krugman’s Eternal Triangle” model (see his summary here), which postulates that when it comes to tensions within the strategic trio formed by exchange rate policy, monetary policy, and international liquidity flows, maintaining control over any one implies a loss of control in one of the other two.

In the case of the Central Europe "four", Poland and the Czech Republic opted for maintaining their grip on monetary policy, thus accepting the need for their currency to "freefloat" and move according to the ebbs and flows of market sentiment. As it turns out this decision has served them remarkably well, since the real appreciation in their currencies which accompanied the good times helped take some of the sting out of inflation, while their ability to rapidly reduce interest rates into the downturn has lead to currency depreciation, helping to sustain exports and avoid deflation related issues.

The other two countries (Hungary and Romania), to a greater or lesser degree prioritised currency stability, and as a result had to sacrifice a lot of control over monetary policy, in the process exposing themselves to the risk of much more violent swings in market sentiment when it comes to capital flows. Having been pushed by the logic of their currency decision towards tolerating higher inflation, they have seen the competitiveness of their home industries gradually undermined, and as a consequence found themselves pushed into large current account deficits for just as long the market was prepared to support them, and into sharp domestic contractions once they were no longer disposed so to do.

A second problem which stems from this "initial decision" has been the tendency for households in the latter two countries to overload themselves with unhedged forex loans, a move which stems to some considerable extent from the currency decision, since in order to stabilise the currency, the central banks have had to maintain higher than desireable interest rates, which only reinforced the attractiveness of borrowing in forex, which in turn produced lock-in at the central bank, since it can no longer afford to let the currency slide due to the balance sheet impact on households. Significantly the forex borrowing problem is much less in Poland than it is in Hungary or Romania, and in the Czech Republic it is nearly non-existent.

The third consequence of the decision to loosen control on domestic monetary policy has been the need to tolerate higher than desireable inflation, a necessity which was also accompanied by a predisposition to do so (which had its origin in the erroneous belief that the lions share of the wage differential between West and Eastern Europe is an “unfair” reflection of the region’s earlier history, and essentially a market distortion). The result has been, since 2005, a steady increase in unit wage costs with an accompanying loss of competitiveness, and an increasing dependence on external borrowing to fuel domestic consumption.

So, if we look at the current state of economic play in the four countries, we find two of them (Hungary and Romania) undergoing very severe economic contractions - to such a degree that in both cases the IMF has had to be called in. At the same time both of them are still having to "grin and bear" higher than desireable inflation and interest rates. In the other two countries the contraction is milder, the financial instability less dramatic, and both inflation and domestic interest rates are much lower. Really, looked at in this light, I think there can be little doubt who made the best decision.

Here for comparative purposes are charts illustrating the varying degrees of economic contraction, inflation, and interest rates. GDP contraction rates actually present a little problem at the moment, since one of the relevant countries - Poland - still has to report. However Michal Boni, chief adviser to the Prime Minister, told the newspaper Dziennik this week that the economy expanded at an annual rate of between 0.5% and 1% in Q1. So lets take the lower bound as good, it is still an expansion. 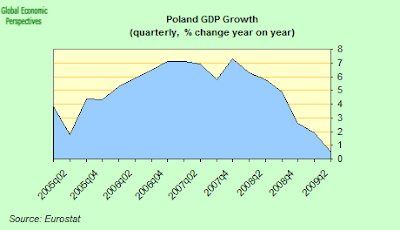 The economy in the Czech Republic contracted by an estimated 4.9% year on year in the second quarter. 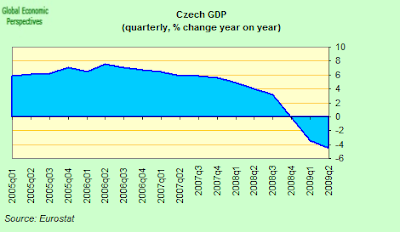 The Hungarian economy contracted by an estimated 7.4% year on year in Q2. 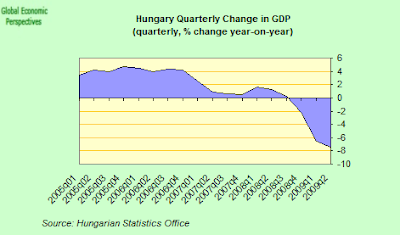 While the Romanian economy contracted by an estimated 8.8% year on year. 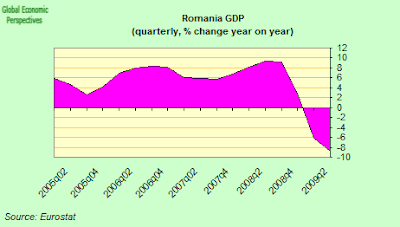 The CPI in the Czech Republic rose by an annual 0.3% in July. 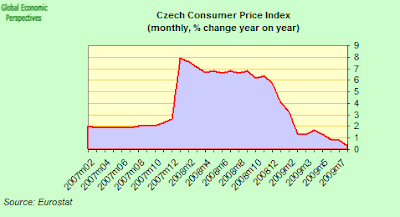 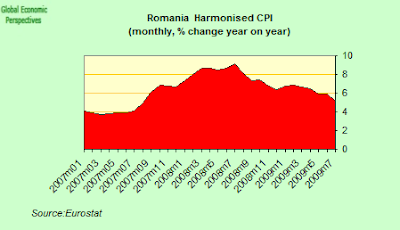 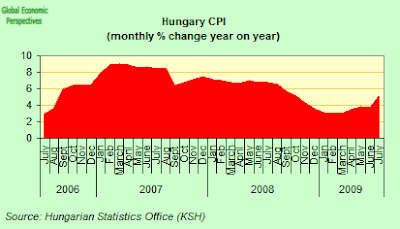 The benchmark central bank interest rate in Poland is currently 3.5%. 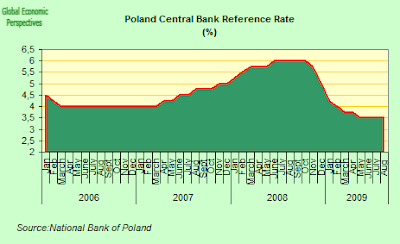 The benchmark central bank interest rate in the Czech Republic is currently 1.25%. 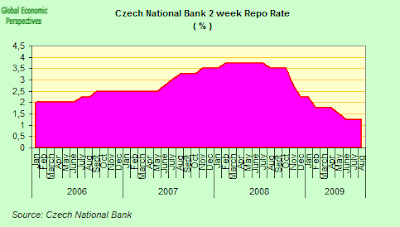 The benchmark central bank interest rate in Romania is currently 8.5%. 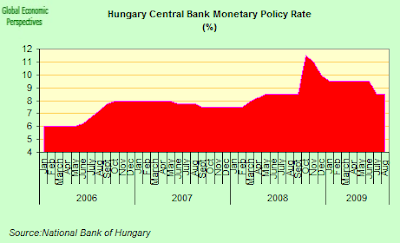 The benchmark central bank interest rate in Hungary is currently 8.5%. 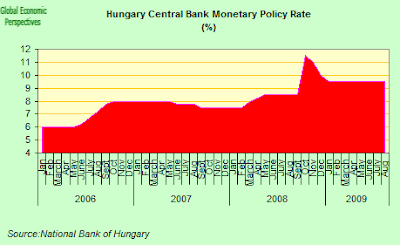