A New Spectre Is Haunting Europe, A Spanish One

A spectre is haunting Europe, but this time it is not the spectre of revolt by the popular masses, or even one of yet another wave of bank bailouts. No, the spectre which is currently stalking the corridors of Europe's most prestigous institutions is one of a Spanish economy which stays on a flatline while Europe's other economies, one by one, start to struggle back to life. And the main reason that this particular ghostly image is giving everyone so many sleepless nights is because Europe's current institutional structures, and especially the monetary policy tools available at the ECB are scarcely prepared for such a nighmare eventuality.


France Is Recovering, And The Rebound Is Robust

First it was just a rumour, then it was a possibility, and now it has become a reality - some of Europe’s economies are springing back into life. But only some. It all began quietly, with a barely noticeable 0.3% quarterly growth in French and German GDP in the second three months of this year. France and Germany will have maintained their modest growth into the third quarter , while Italy has now joined them, leaving only Spain among the Eurozone big four, registering yet another quarter contraction, and, more importantly, showing no evident sign that an early return to normal activity is anywhere near to the horizon.

In fact Spanish gross domestic product fell 0.4 percent quarter on quarter in the third quarter following a 1.1 percent drop between April and June , according to the Bank of Spain monthly bulletin. Spain's GDP also contracted 4.1 percent year on year in the quarter, after a contraction of 4.2 percent in the second three months. 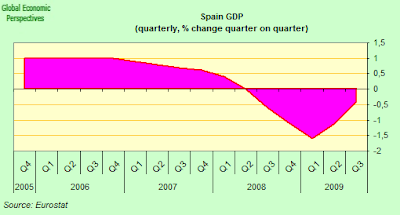 'This is the least pronounced contraction since the beginning of the recession ... and this improvement is linked to state-backed measures with a temporary effect,' the bank said.

To this government stimulus effect, I would also add the net trade effect which is being felt as a result of the strong fall in imports, and the consequent closing of the current account deficit. With imports falling faster than exports (on an annual basis) the net impact is positive growth in the headline GDP number, and the Spanish CA deficit was closing very rapidly indeed in the third quarter (see chart below). 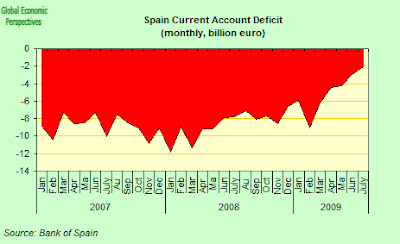 The impact of the stimulus package can also be seen in the seasonally adjusted unemployment numbers supplied to Eurostat by the Spanish Statistics Office (INE). Unemployment (which hit 19.3% in September - see chart below) has been rising continuously since mid 2007, but the sharpest increases were registered during the fourth quarter of 2008 and the first quarter of 2009. 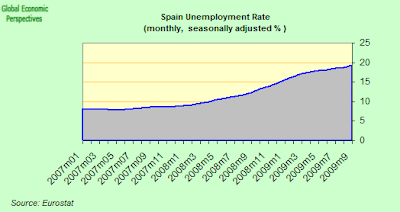 It is very hard to see any real difference in the trend rate of increase between the second and third quarters of 2009, and we should expect this trend job attrition rate to continue until it once more accelerates under the impact of either the government being unable to continue funding the stimulus, or the banking sector having a financial crisis (possibly induced by someone being forced into trying to sell some of the housing units they are accumulating only to discover that there are no buyers, since the market is effectively dead).

Life, Unfortunately For Spain, Is Elsewhere

But for all our preoccupations growth in 2009 is now no longer the issue. All eyes are gradually moving towards the outlook for 2010, and it is here that those little red lights have suddenly started flashing over at the European Central Bank.


And the problem is a real and growing one, since according to a series of reports which have been published during the last week, while activity in the export dependent German economy remained very fragile, the French one has really starting to hum. The first sign of this came on Tuesday, with the initial reading for the October Purchasing Manager Index which showed that while the Eurozone economy in general entered the fourth quarter on a strong note, with growth accelerating in both manufacturing and services sectors, the private sector in France started to earn alpha grades by clocking up a third successive month of accelerating growth, leaving us with the impression that France is now seeing its steepest output expansion in nearly three years.

Then on Wednesday the ECB presented its monthly bank lending data, which showed that lending to the euro area private sector shrank by an annualised 0.3 percent in September, the first such contraction since the series began in 1992. But looking a little more closely at a lending activity on a country by country basis, we find that while lending continues to contract in Spain, in France the credit cycle has turned, and indeed lending to households is now once more rising steadily (see chart below), indeed it never fell below an annual 4% rate of increase and the annualised quarterly growth rate in lending has been rising since the end of the first quarter. 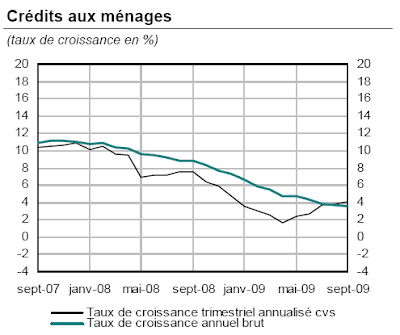 That is to say, credit is once more starting to flow freely round the French economy, while here in Spain banks continue to accumulate reserves, lending generously to the government, while money for struggling small companies and for young people looking to buy homes is hard to find. What is more, if we look at the chart below (which was prepared by Dominique Barbet and Martine Borde for PNB Paribas) we will see that the stock of unsold new homes – which was in any event never very high in France, maybe 100,000 in the spring – is down by 20% as sales steadily pick up again, while here in Spain we continue to play a guessing game to decide just how many (more than a million surely) such properties there are here, and the number is growing, not declining, since real new sales to private individuals (as opposed to newly completed properties contracted two years or so ago, or exchanges between developers and banks) are almost non existent at this point. Everyone knows prices will fall further, and are waiting for them to go down. 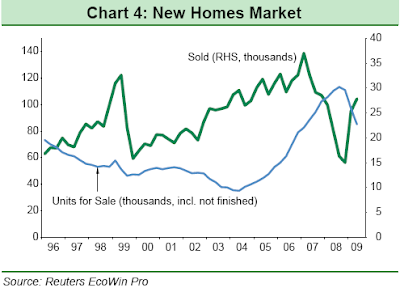 Then on Friday we had the key piece of information, which confirmed what many of us already suspected, since Markit PMI data for October retail sales made plain the presence of very divergent trends across the Eurozone, with ever more robust growth in France contrasting with falling sales in Germany and Italy. As Jack Kennedy, economist at survey organisers Markit Economics said “While the sense of growing optimism should be treated with some caution – it appears the increase in sales was also supported by widespread discounting and the continuation of the government’s car scrappage scheme – the outperformance of France relative to Germany and Italy offers further evidence that it is France that is leading the Eurozone recovery.”

And here, with this very outperformance comes the problem, since the ECB policy rate will be set to target average eurozone inflation, which will certainly be lower than inflation in France, and possibly significantly lower. Which means the ECB policy rate will be below the one which the French economy will, in reality, need.
Between 2000 and 2008 the structural dynamics of the Eurosystem were different from now. Spain was the "exceptional student", with above-average growth, and inflation which was consistently over the Eurozone average, and for long periods above the ECB policy rate. This had the consequence, of course, that French inflation was nearly always below the average. Now things have changed. We are coming out of recession with a eurozone divided into three groups. French growth is becoming robust, while Germany and Italy are dependent on exports and just keeping their head above water. Spain, on the other hand, fails to recover and continues to contract. This is what makes the current situation critical, since starting in 2010 France will have an inflation rate over the EU average, and in all probability over the ECB interest rate. Which means that if something isn't done, and soon, to force the situation in Spain, and produce a recovery, France will have negative interest real rates during a sharp economic rebound, with all the risks that that implies.

Only last Wednesday Norway became the first western European country to raise interest rates since the start of the financial crisis after its central bank reported finding “signs of renewed growth” in the global economy. Central bankers from across the global, from Washington, to Sydney, to Delhi and to Oslo are all now busily telling us they are going to take increasing account of future accelerations in asset prices in an attempt to avoid repeating policy mistakes that are presumed to have inflated two speculative bubbles in a decade – and left the entire Spanish economy in a lamentable state. If France had its own monetary policy I have no doubt La Banque de France would be itching to follow the Norges Bank and raise rates, but there is one small problem, La Banque de France has no capacity to decide on monetary policy in this way, and herein lies the heart of what is now Europe and the ECB’s greatest dilemma.