Controlling The Uncontrollable: Spain's National Addiction To The Use Of "Dinero B"

Well, before we go any further, I would like to make clear that what I am going to talk about in this post is not anything illegal, or even irregular (things like this must be going on in almost all Euro Area countries even as I write). Bending of the rules? Perhaps. Taking them to their limit? Certainly.

What Spain's central, local and regional government does is take advantage of loopholes in Eurostat accounting regulations to generate debt that really is debt, but is not classified as such according to the Eurostat excess deficit criteria. Key areas involved are debts on the balance sheets of state (or regionally, or locally) owned companies, overdue payments for receivables (very common practice in Spain), and public-private-partnership-type leaseback-arrangements. None of these are (typically) classified as debt, though they do all have to be paid at some point, which means there is a stream of revenue (flow) impact rather than a debt (stock) one (unless and until Eurostat changes the rules). Which means that while they do not impact that critical debt to GDP number, servicing these liabilities does exaccerbate the annual fiscal deficit one. Which is why ultimately bringing Spain's fiscal deficit under control will almost certainly prove to be much harder work than it seems.

We are able to make this comparison since the Bank of Spain effectively maintains a double entry book keeping system, whereby it keeps one record under the National Financial Accounts of the total debt , while at the same time keeping a separate record of debt as classified for the EU Excess Deficit Procedure.

As we can see in the chart below, total gross government debt in Spain as classified in the Financial Accounts was some 751 billion euros (or around 75% of GDP), as compared with the 585 billion (or around 58% of GDP) in gross debt recognised under the EU excess deficit procedure classification. 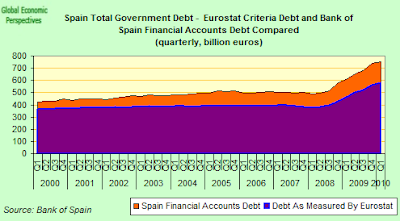 Now if we look at the chart below, we will see that the proportion of Spanish national debt which remains outside the Eurostat classification system has risen since the introduction of the euro - from 14 to around 23 per cent - but most of the increase actually took place in the run up to the crisis. So as Spains funding problem has deteriorated, there does not seem to be any direct evidence that this has impacted the level of "non-accounted" debt, it has simply remained the same (in % terms). Of course, as the debt itself has balooned, so too has the "dinero B" part. 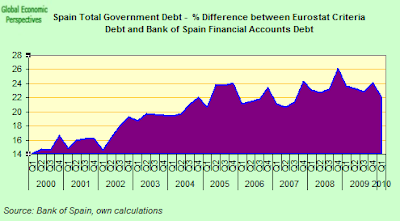 In the case of the regions (Spain's Autonomous Communities) the position is not that different - the % has increased from 12% in 2000 to around 25% at the present time - even if there is rather more evidence of "stress" on their finances after the start of 2008 (see chart). 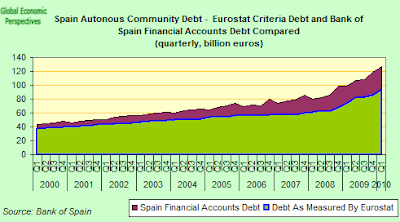 The position of Spain's local authorities is also similar - with the proportion of "non-accounted" debt rising from 14 to about 23% - although again, there is even more evidence of post-crisis financial stress if we look at the gap between the two lines, and how it widens, which is none too surprising when you consider that it was the local authorities who lost the biggest chunk of their financing with the collapse of the construction boom. Indeed, it is my impression that in this case the gap only hasn't widened further due to the fact that very few people are now willing to give any sort of credit to Spain's local authorities. 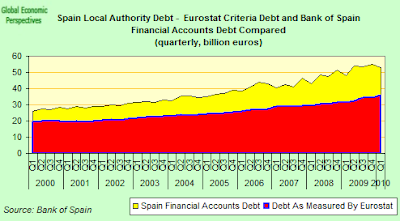 As I indicate, one of the easiest ways of "kicking the can down the road" in terms of public finances, is to delay payment on receiveables (if you are not sure what receivables are, check this wikipedia entry), and the following charts show the relentless use of this procedure in Spain, despite the promise of Spain's government to bring short term credit under control by 2013, there is no sign of this happening to date. 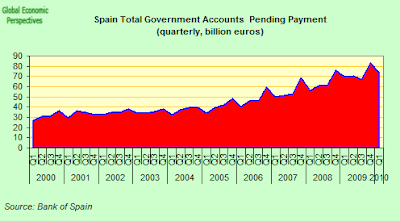 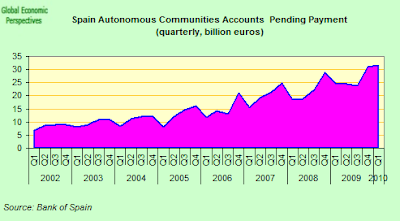 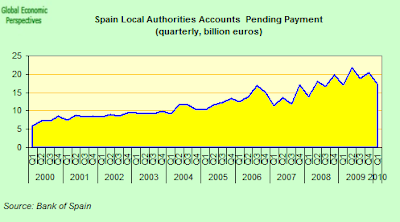 The other big area of "non-accounted" debt, is that accumulated by governmentally owned or "satellite" companies (who may for example run public transport, or outsourced cleaning services for local authorities). As can be seen from the charts below, this debt has increased massively since the crisis started. 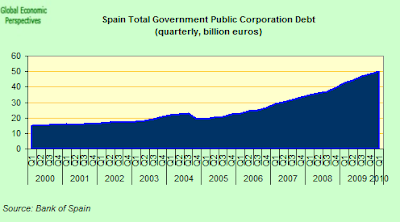 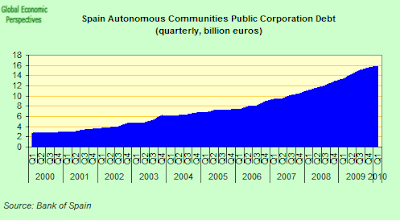 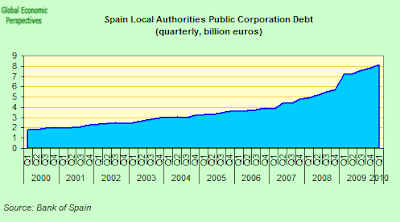 As I say at the start of this post, none of this debt is hidden, nor is it illegal under Eurostat regulations, so there is nothing (in principle) out-of-order here. This fact doesn't make the situation any less preoccupying, since one way or another all this debt will have to be paid. What its continuing presence does, I think, indicate, is the existence of some degree of "laissez faire" attitude towards fiscal targets on the part of the EU Commission and indeed the IMF (as I argue in this post, it is hard to understand the IMFs own Spain growth forecasts and CA deficit levels if they are not assuming a rather higher level of indebtedness into the future than anyone is prepared to admit right now) . The May measures are deemed to have worked. Europe's Soveregin Debt Crisis is, if not over, at least in abeyance.

Symptomatic of the current "relaxed" state of things is the fact that only last week José Luis Rodríguez Zapatero, the Spanish prime minister, even started to air the possibility of reversing some of the spending cuts his government announced in May. In a cautious statement, which the FTs Victor Mallet reports was apparently aimed at testing the mood of financial markets, Mr Zapatero said the government expected to restore some suspended infrastructure investments if – as the government anticipated – renewed financial stability left room for manoeuvre in the 2011 budget. There is nothing here about growth, please note.

“In 10 to 15 days we will be able to give some positive news in relation to restoring investment activity in infrastructure, which will affect most regions and would provide relief, an important boost, to construction companies,” he told a news conference in Mallorca after meeting King Juan Carlos at the monarch’s summer residence.

A €6bn cut in public sector investment was among the biggest austerity measures announced by Mr Zapatero in May to coincide with the EU and IMF announcement of a €750bn financing facility for the eurozone.

Despite the fact that among the evident losers in what was effectively a "U turn" at the ECB in May were the monetary hard-liners like Jürgen Stark and Axel Weber, you obviosuly can't keep a good man down, and European Central Bank Executive Board member Stark was out again on Monday, warning in the columns of the Financial Times that the European Union is all set to ramp up economic surveillance to prevent a repeat of the region's recent debt crisis. "A new framework for macroeconomic surveillance will monitor whether national trends are compatible with those that are appropriate for the Union as a whole", he said. "This framework will allow both targeted peer pressure and differentiated and more binding recommendations on follow-up action at the national level."

All I can say looking at the above numbers is, there isn't much sign of any of this being operational yet, but then, as I say, the Jürgen Starks of this world have rather had their noses pushed out of joint in recent weeks.
Posted by Edward Hugh at 10:09 PM