The Great Greek And Spanish GDP Mystery - One Hypothesis

Many an economic eyebrow must have been raised last Friday when Europe's first quarter GDP data was released, and people discovered that the Greek economy had suddenly surged forward, rising by 0.8% over the level it had attained in the last three months of 2010 (or at a 3.2% annual rate, or faster than the US). Since almost everyone with knowledge of the situation is forecasting a further contraction in the economy this year, the result may have been thought to be a surprising one. 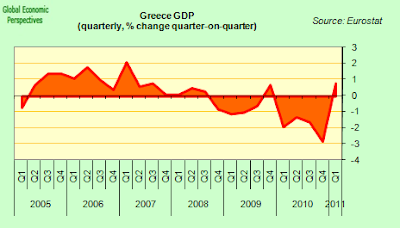 Well, there is no need to call in Sherlock homes just yet, or even the strong-arm boys from Eurostat, since I think I may have worked out what happened to Greek GDP in Q1, or at least I have a good working hypothesis. In the process we will also examine why it was that, against all prognoses, and against a colossal amount of anecdotal evidence that the Spanish economy is falling back towards recession, Spanish GDP actually accelerated.

But first, a brief intro to Econ 101 macro. It is important to grasp the fact that GDP isn't the be all and end all of economic analysis, and certainly doesn't give us a complete measure of economic activity. Indeed there are many economic processes which may be of interest to economists - levels of indebtedness, for example, which are simply not captured by the measure, since GDP is what it is: a measure of domestic value added, according to the following formula:

Now, in general we know that the first three items on the list are falling in Greece. even if there does seem to have been some slight improvement in retail sales during the quarter, after a very steep fall in the autumn. 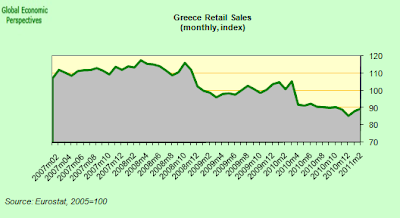 But what about the net trade component? Well, before going further it is important to consider is how this calculation works. Basically net trade can improve either by the rate of export growth accelerating, or by the rate of import growth decelerating. Now in Greece we know that exports have improved, but Greek exports are proportionally so small, and form such a limited part of total economic activity, how can they possibly pull the economy upwards in this way (causing a 0.8% q-o-q increase in GDP)? Well, looking at the chart for imports it can be seen that just as exports have been accelerating, imports have been decelerating, so the combined impact might be quite large (please note we don't yet have the March data). 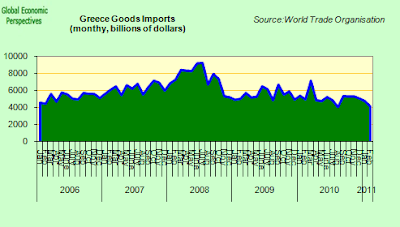 This impression that it was as much a drop in imports as a rise in exports that was behind the sharp quarterly rise in GDP is further reinforced if we look at the year on year performance of the two variables. In recent months Greek imports are sharply down y-o-y (despite the surge in energy prices) while exports are up. 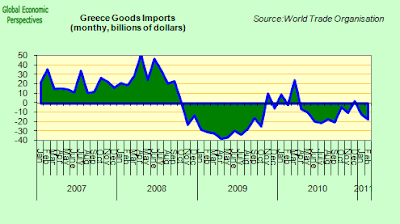 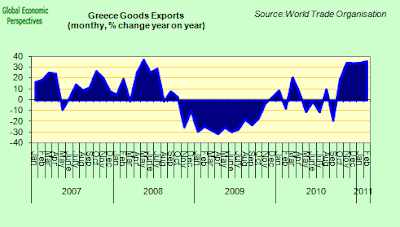 So GDP rose, but what about does this tell us about living standards? Well, this is just the point. Since the fall in imports reflects a fall in demand, it implies a fall in living standards,and this is the strange thing about what GDP measures and what it doesn't measure. GDP can rise sharply, even when unemployment is rising, and people are getting poorer. This is largely because one of the things GDP doesn't measure is the evolution of what some call the "financial balances" (for more explanation of this idea see the pioneering work of the Canadian economist Rob Parenteau (here in somewhat polemical form, and here as a more technical explanation). 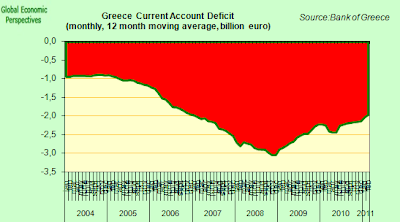 In countries running an ongoing trade and current account deficit, the rise in living standards which comes from an increasing excess of imports over exports figures in national accounts as an output negative (apart from the transport and retail outlet activity which are a spin-off), and the counter party to all that "living beyond our means" feel-good added credit-driven purchasing power really only shows up as a negative item on the financial side of the accounts, as money borrowed from the exterior, money which is used to finance the deficit. It is a negative item, because all that potential capacity to spend is being diverted away from national activity to external activity. So while you pay for the products consumed (through debt) others get the long term benefit of your spending. Which is why it is such a bad idea to run sizeable current account deficits over any great length of time, since they are financed by credit, and credit is only a way of transferring demand from the future to the present, which means you will feel richer now, and poorer in the future, and this is exactly what is happening to Greece. It is also why the only way to put the situation straight is to export more, and run a trade and current account surplus, since then the value of your net external debt falls. So the correction is necessary and inevitable, although the curious thin is that while it is taking place, and while exports are rising and imports and living standards falling GDP rises, even though people feel much worse off.

Obviously, having an economy appearing to accelerate like this is a bit counter intuitive. Evidently it is not the same as having a devaluation-induced import-reduction with demand remaining equal, and more productive activity taking place inside the country as relative prices result in steady import substitution, but then demand deflation policies have these peculiarities attached. Maybe we could think of the type of correction Greece is engaged in as less future demand being brought forward to today, under the hope that the subsequent path of the economy will eventually be on a higher level than it otherwise would have been. Pay now, live later.

In the Greek case, since private sector borrowing is at a total standstill, and public sector deficit borrowing is being steadily reduced, the current account deficit is being forced to close, with the consequence that since exports can't rise much (due to competitiveness issues, and their low base) imports will need to fall while unemployment will probably continue to rise. 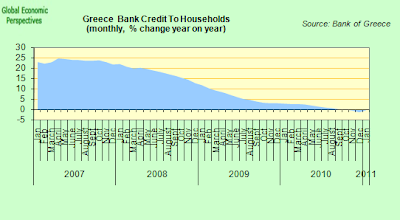 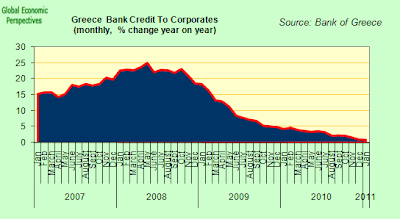 If this analysis of what has been going on in Greece is correct, then it can also help us understand the latest set of Spanish GDP numbers a bit better. According to the latest data, in the first quarter of this year Spain's GDP rose by 0.3% over Q4 2010 and by 0.8% over the year earlier quarter. This surprised many analysts since the Bank of Spain has previously estimated growth to be around 0.2%, and a number of 0.1% was often anticipated. 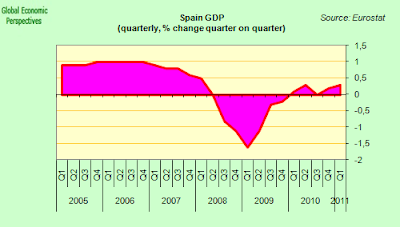 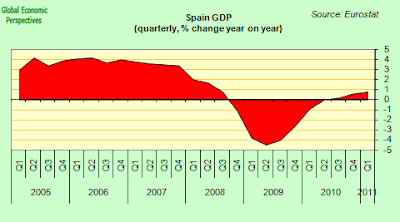 In theory the Q1 performance marks an acceleration over the 0.2% quarterly rise registered in the last quarter of 2010. Such an acceleration seems odd, since all the recent data, industrial output, retail sales, unemployment has been negative, and doubly so since the government is in the process of a very sharp (3.2%) fiscal adjustment process. 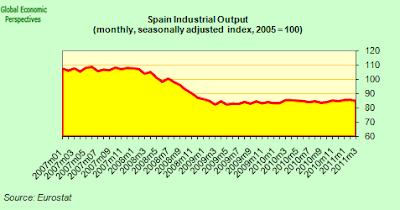 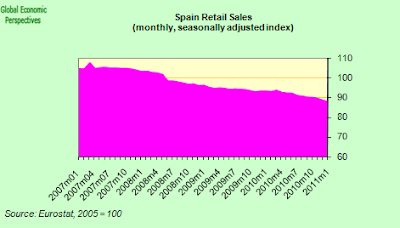 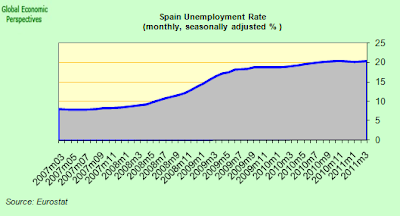 Yet, if we come to look at the relative import/export performance, we will see a milder version of the same phenomenon. It seems exports rose and imports fell in the first quarter, creating a very special kind of "win-win" situation. 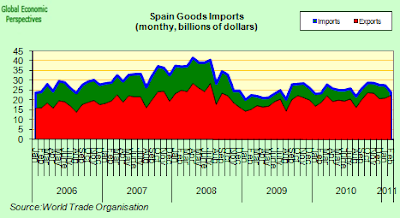 This is a much milder version of the Greek story, but possibly similar processes are at work in both cases, as Spain's previously large current account deficit is also being steadily forced to close. 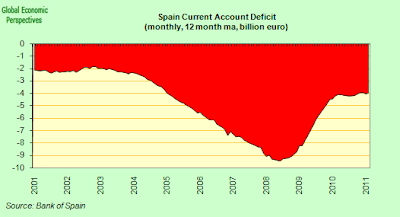 On the other hand, in Spain's case other factors might be at work, like overspending before this month's regional and local elections. In any event, I am describing all the above as a hypothesis because we still don't have either the March trade data or the detailed GDP data. When we have access to both of these we will have a better idea of just how valid this hypothesis of mine actually is. At the end of the day, one swallow doesn't make a summer, and one month's GDP surprise is simply a drop in the ocean in relation to the major challenges which face these economies in the quarters and years ahead.
Posted by Edward Hugh at 4:01 AM