Is Japan In Danger Of A Deflation Relapse?

"Japan’s V-shaped recovery has now become a statistical fact rather than our forecast. According to retail sales statistics, the level of retail sales in June has already exceeded the level prior to the disaster. Sales of general merchandise and apparel have recovered and replacement demand for vehicles and reconstruction demand for household equipment have lifted sales of these items to above their levels of February".
Takuji Okubo, Societe Generale (see note below).

Is Japan really, as Tukuji Okubo suggests, having a "V-shaped" recovery? On some measures this assertion would be hard to justify, but then, at the end of the day, perhaps it all depends what you mean by "V-shaped" and what you mean by recovery. Obviously, as he suggests, retails sales have just bounced back to a point above where they were when the tsunami hit (see chart below), but look what had been happening to them in the months prior to the disaster. Sales had been losing momentum ever since mid 2010, as had the rest of the Japanese economy. It is well worth reminding ourselves at this point that Japan entered recession (that is had the second of 2 quarters of eceonomic contraction) in the first quarter of 2011 because it had already contracted in the last quarter of 2010. So evidently it is not so hard for the economy to recover to its February point of departure. The more interesting question to ask might be what happens next? If the economy was weak in February, and a global slowdown is now in the works (a slowdown with a financial dimension which exerts constant upward pressure on the yen), then at some point might the next move not be down rather than up? 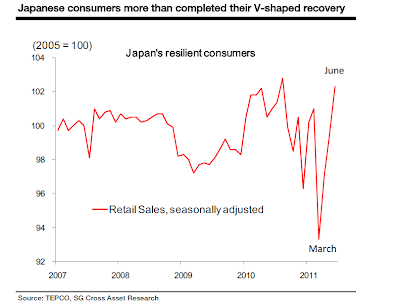 As we know, Japan's is an export dependent economy, so more than retail sales it is external demand that matters, and as we also know global demand is slowing at this point, which makes things more, and not less, difficult for Japan.


Industrial output has recovered to some extent, but in June it was still 5% below the February level, and nearly 16% below the pre-recession high. 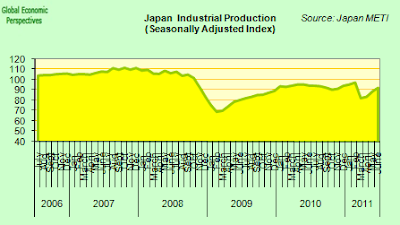 And while the July manufacturing PMI showed that the sector continued to expand, the expansion was only moderate. More significantly new export orders fell for a fifth successive month, with survey respondents mentioning the fall in China and the US in particular. 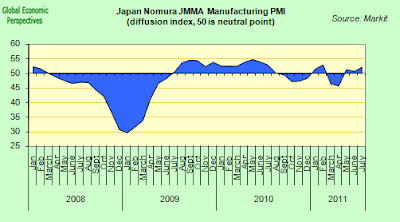 And if we look at the present level of Japanese exports, we can put this "V-shaped" recovery in some sort of perspective, since in June the level of exports was down 19% from the June 2008 level (ie the level of 3 years ago). 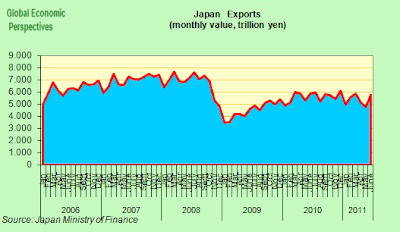 Exporters are dependent on demand for their products elsewhere, and as we can see, demand for Japanese products in the US has remained well below the pre-crisis level. 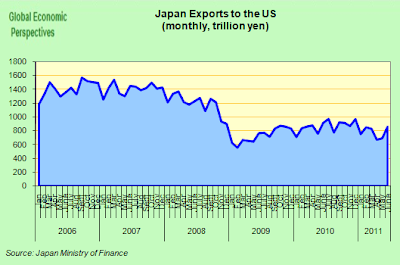 We find a similar picture as regards exports to Europe, and it is evident that the problem goes back well beyond the recent natural disaster. 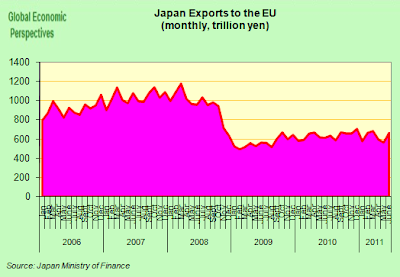 More worryingly, exports to China are now stagnating, and here the issue is clearly not absence of potential demand (since German exports to China have been booming) but price, and the recent high values of the yen. 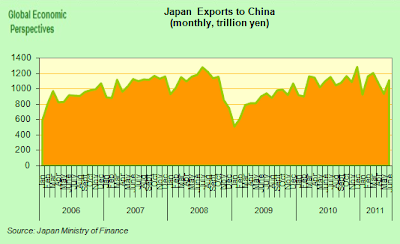 And if we move beyond retail sales (which evidently had a very good month in June) and take a broader look at consumption in the economy, then we find that (according to statistics office date) household spending was still down 4.2% in real terms in June over a year earlier: 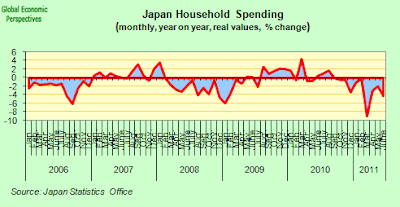 While gross income in worker households was down 6.7% over June 2010. So there is still a long way to go on the income side before we can expect a real deman recovery. 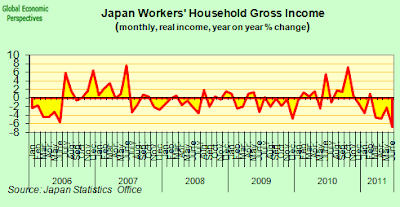 The broader weakness in consumer spending was also revealed in the June services PMI, which once more showed quite strong contraction. 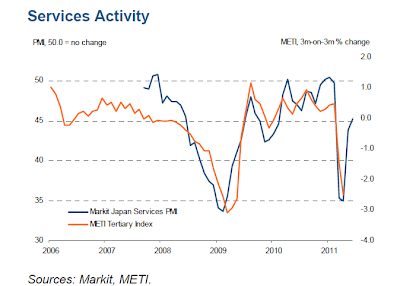 Which brings me back to the main point of this post, what are the dangers of Japan slipping back into deflation at this point? The Japanese price indexes had, as was the case in 2008, being moving back into positive territory interannually on the back of the surge in commodity prices, but now, with the global economy slowing, there are clear signs that inflation is heading down again, and the ex-food and energy register only rose 0.1% over a year earlier in June, which is to say by September/October we could easily be back in negative territory again.

This view is reinforced if we look at the price component in the manufacturing PMI, since while input costs were again up sharply in July, they rose at the slowest pace in six months. On the other hand the survey found that the rate of output price inflation was only modest, since capacity issues and competitive pressures continued to restrict firms’ pricing power. 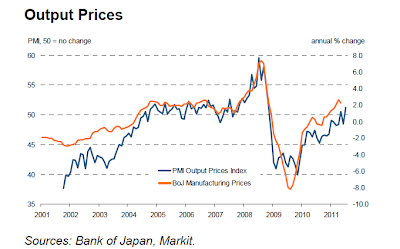 As will be remembered, deflation represents a serious problem for any country with a serious sovereign debt problem, since weak economic growth and price declines can mean sustained periods of nominal GDP shrinkage which simply sends the level of debt to GDP spiralling upwards, as we can see has happened in the Japan case. 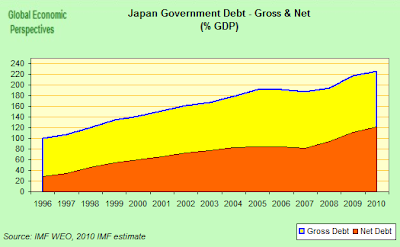 For many this problem in Japan is benign, since domestic Japanese savings finance the debt, and this may well be the case for as long as Japanese home bias and the current account surplus can be guaranteed, but if either of these things go then the rate of interest which might need to be paid to attract capital could quickly make the debt dynamics unsustainable. Simply put, Japan cannot afford to "normalise" in the sense of having "normal" rates of interest and low inflation, and this fact alone should be worrying people.

Which brings us back to the starting point in the present piece: the "V-shaped" recovery in Japanese retail sales. While attention this week has been largely focused on debt sustainability in the United States, it should not escape our notice that Japan’s government chose the end of last week to make public plans to spend a minimum of Y19,000bn over the next five years and up to Y23,000bn over the coming decade in order to carry out the reconstruction of the disaster-struck north-eastern coast. There was, however, one deeply significant detail about the plan as presented, and that was that no information was provided on how this pretty significant increase in spending was going to be paid for. Despite earlier speculation no information was included on tax increases which might be implemented to fund the spending. It seems no agreement was possible within the ruling Democratic Party of Japan on the issue.

Earlier proposals had called for emergency tax increases of about Y10,000bn ($130bn), including an increase in income tax and a rise in corporate taxes, to fund reconstruction. But fierce opposition to such tax increases from within the ruling DPJ is said to have made agreement on this impossible. Just as significantly, little progress has been made on the proposal to increase the consumption tax (currently 5%) in order to reduce the mountain of debt, which is perhaps not so surprising since evidently such an increase would quickly bring to an end the current "V-shaped" surge in retail sales.

All in all, the phenomenon is very reminiscent of something which is currently going on out there, over on the other side of the Pacific, raising the possibility that the United States may not the only non-European country currently running the risk of having a credit downgrade in the non too distant future.

NB, I certainly wouldn't like it to give the impression that I am in any way singling out Takuji Okubo for special criticism here, his report was simply the first I read, and the argument caught my attention, in fact his optimistic assesment of the Japan situation is pretty widespread among bank analysts at this point. The argument advanced in my post is simply an extension of what I have been arguing since the tsunami tragedy hit the country. See Japan’s Economy Struggles For Air (May 6th, 2011) and "Surely There Is Nothing “Funny” About What Is Going on in Japan?" (March 21st, 2011).

This post first appeared on my Roubini Global Econmonitor Blog "Don't Shoot The Messenger".
Posted by Edward Hugh at 5:45 AM