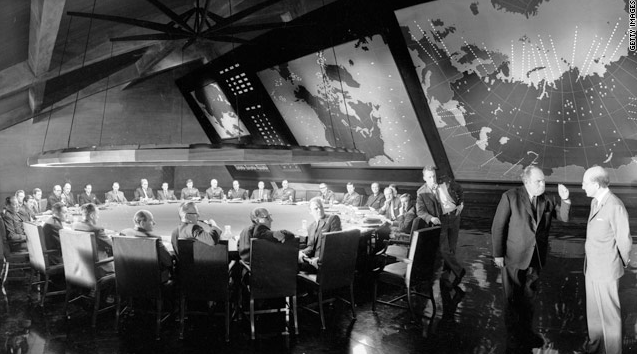 According to a recent study by Stephane Deo and his collegues at UBS, the euro – as it is currently structured – should not exist. It is hard to disagree. The problem is that it does, and just like the legendary Eagles' song "Hotel California" they refer to, it was intentionally set up in such a way that once you get inside there is no way you can leave. There is no checkout procedure.

Reading the UBS report put me in mind of Stanley Kubrick’s cult film, “Dr. Strangelove.” In a key scene the U.S. President, on being informed of the existence of a device (termed the “Doomsday Machine”) which shares notably similar characteristics with the current euro area, is stupefied. On asking those around him -“but how is it possible for something to be triggered automatically, and at the same time impossible to untrigger?” – Peter Sellers, as Dr. Strangelove, replies: “Mr. President, it is not only possible, it is essential. That is the whole idea of this machine, you know.”

Which takes us directly to last week’s European Finance Ministers meeting in Poland. In a setting horribly reminiscent of the Strangelove “War Room,” U.S. Treasury Secretary Timothy Geithner informed the assembled dignitaries that, in a nutshell, Europe was facing catastrophe.

Unruffled by such evidently exaggerated doomsday mongering, the European ministers essentially told Geithner to “mind his own business” – a response which could be roughly translated as “we set this thing up, and we know how to handle it, we don’t need your help, so please buzz off.”

The challenge facing the current generation of Eurozone managers is this: The system they created is now malfunctioning and is in danger of exploding under the force of its own internal contradictions. Yet any attempt to dismantle it (by someone leaving, or making someone leave, for example) would appear to threaten all involved with consequences which could easily be far worse, not only for Europe, but for the whole global economy. Hence the dithering, and the reluctance to act decisively.

Aside from the odd panic-stricken outburst from one or other EU Commissioner in Brussels, however, it would be hard to discern this harsh reality in any of the recent statements by Europe’s leaders. The euro is a great success, our economic fundamentals are far better than those to be found in the U.S., and we will do absolutely whatever it takes to save the common currency. This is the main message they project to the world, even while doing far less than most external observers consider they need to do, a state of affairs which has led Nobel economist Paul Krugman to speak of “Pharaonic denial."

Perhaps the best example of this denial is the insistence of Eurozone managers to focus on only one part of the problem, the fiscal deficit. Only in the Greek case could fiscal excesses prior to the Financial Crisis be considered at the heart of the problem. In Italy and Portugal, the issue is more a combination of low growth and a high level of accumulated debt, an ailment which a decade of euro membership has done little to cure. In Spain and Ireland, the problems facing the economies are more a by-product of massive property bubbles – bubbles whose creation was aided and abetted by a thoroughly inadequate monetary policy administered by the European Central Bank. In all these cases the recent fiscal deficits are but symptoms of a much bigger problem, and at present only the symptoms are being treated. In the meantime even the Zone’s newer Eastern members like Slovenia and Slovakia look to be in danger of catching the disease.

Without restoring growth and competitiveness along Europe’s periphery, even the most radical solutions, like a common fiscal treasury and Eurobonds, are doomed to failure. As the population ages and demands on states increase, voters in the North will never accept cuts in their own welfare and pension systems to support economies to the South. But solutions are not being put on the table since the gravity of the issue simply is not grasped. Meanwhile the infernal machine, complete with its initial design fault, continues headlong along its pre-programmed course. Tick-tock, tick-tock goes the clock, but no one really seems to know what time it is.

Truer words were never said, even in jest: Europe is facing catastrophe. One of these fine days Greece will default, and the world as we know it will somehow have irrevocably changed. That day we will get to see the future, and will have the opportunity to learn at first hand how the euro Doomsday Machine works.

This post originally appeared on the CNN Business Blog
Posted by Edward Hugh at 4:15 AM