As the heat wave which has been hanging over Southern Europe for the last couple of weeks steadily eases off there is little sign that any of the warm air which is disippating is reaching the chilled motors of the European and Chinese economies. The results of this months flash PMI readings are at best more of the same, and at worst show continuing deterioration. While current conditions stabilised in some areas, new orders, and especially new export orders often hit new post-recovery lows. There is every likelihood that the final August global readings will be much more of the same.

The Eurozone story is one of read the details carefully. The composite index was unchanged at 51.1, which means a very sligh expansion in activity (50 is the neutral point), so the sharp deterioration seen in recent months did grind to a halt. But to understand the "why" of this we need to drill down into some of the individual country aspects. 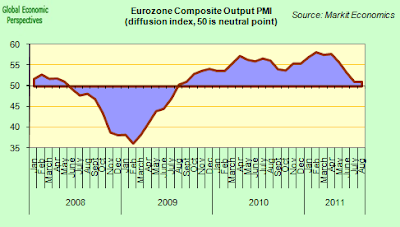 French services activity would be a good place to start, since it is here that the greatest improvement was to be found. The services activity index rose from 54.2 in July to 56.1 in August, showing that despite the recent stagnation in French GDP there is life in French consumption yet awhile. At the same time manufacturing conditions deteriorated, and at 49.3 the indicator fell into contraction mode. 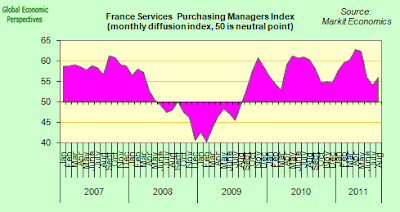 In Germany things were a little bit the other way round, with services falling back sharply and scarcely expanding (50.4), while manufacturing held steady at the July level of 52. 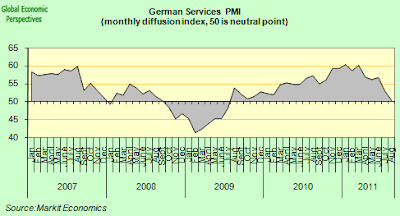 But then again, drilling down within the German manufacturing data we find even more interesting details. In the first place the current output reading was up (from 51.8 to 53.1 - it is important to remember that the PMI is a composite of several different components of which current output is only one).

At the same time, survey participants reported weaker growth of overall business activity which they primarily attributed to lower intakes of new work in August. As the PMI report notes, "although the decline in new business volumes was relatively modest, it represented a change of direction after a two-year period of continuous expansion. Both the manufacturing and service sectors registered falling levels of incoming new work". 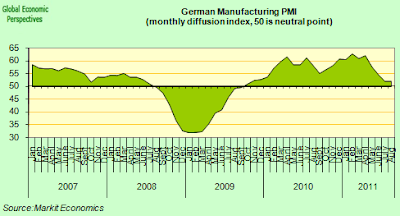 In particular the fact that manufacturers suggested that weaker export sales had contributed to the reduction in new orders in August is more than worthy of note. In fact, the latest data pointed to the fastest drop in new work from abroad since June 2009. So the indicator remained stationary due to the combined impact of heavier current output and deteriorating export orders. What we call in Spain "pan para hoy, y hambre para mañana (bread today at the price of hunger tomorrow).

Basically the rise in manufacturing output this month seems to have been largely the result of inventory increases. According to the PMI report, "the forward-looking new orders to stocks of finished goods ratio in the manufacturing sector deteriorated again during the latest survey period. It was at its lowest level since April 2009, following a survey-record accumulation of post-production inventories in August".

This general picture is confirmed by other recent German surveys. The IFO index - and most notably the businesses expectations part - fell back again in August. indeed, German business morale posted its steepest drop during the month that at any time since the aftermath of the Lehman Brothers collapse in late 2008.

The Munich-based Ifo think tank said its business climate index, which is based on a monthly survey of some 7,000 firms, fell to 108.7 in August from 112.9 in July, well below the Reuters consensus forecast for a 111.0 reading. The last time the index fell so sharply was in November 2008, just after the collapse of Lehman Brothers when the German economy was in its deepest post-war recession. This month's was the lowest reading for the index since June of last year. Even more importantly there was a sharp decline in the Ifo's expectations subindex which fell to 100.1, its lowest in almost two years, and down from 105.0 in July. 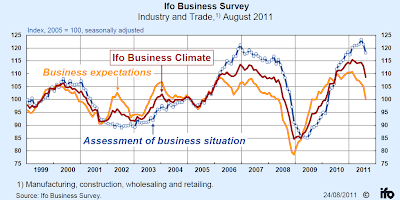 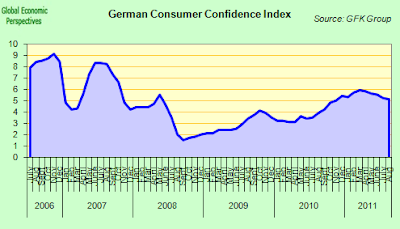 This drop in German consumer confidence forms part of a much wider European pattern, since Eurozone consumer optimism also plummeted in August at the fastest rate for 20 years The European Commission said its consumer confidence indicator fell 5.4 points to minus 16.6 in August – a larger monthly fall than was seen in October 2008 after the collapse of Lehman Brothers.

Just as importantly, there are signs that the German labour market may now be turning. Survey respondents reported a slowdown in job creation across the service sector, and the latest increase in employment levels was the slowest for 12 months. Across the German private sector as a whole, jobs growth was the weakest since October 2010, despite a further robust rise in manufacturing workforce numbers.

In addition the impression offered by the survey data is confirmed by the employment numbers released by the German Statistics Office, which show that new job creation peaked in February/March, and that the rate has been slowing since. If this trend continues then Germany will experience a real change of economic course. It is here that it is important to understand the key difference between the two main Core Euro Area economies. Germany is export dependent, and subject to conditions in external markets. France has a stronger domestic consumption dynamic (hence the recovery in services activity) and is to some extent shielded from sudden movements in external conditions. Having been stationary in the second quarter, it is by no means a done deal that France will contract in Q3.

Contraction Continues On The Periphery
Turning from the core to the periphery, given that the overall PMI remained unchanged, and that the core deteriorated slightly, it may well be that some of those on the periphery did slightly less badly than they did in July. This would not be totally surprising, since many of these economies have significant tourist industries, and the season so far, according to reports, has not been an especially bad one, and in general terms an improvement over 2010. However, what we are talking about here are economies which contracted rather more slowly in August than they did in July. 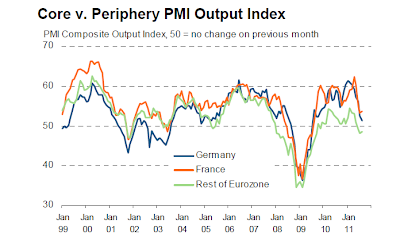 On the inflation front, price pressures eased again markedly during the month. Average prices charged for goods and services showed only a modest increase, the rate of inflation moderating further from April’s high to reach a nine-month low. Service sector charges showed a particularly weak rise, the smallest monthly gain since services charges began rising in February. But, according to the report, it is in manufacturing where the steepest turnaround in price pressures has been evident. Prices charged for goods showed the smallest monthly increase for a year in August, in marked contrast to the survey-record high seen back in March.

Respondents suggested that the slower rate of increase of selling prices reflected a combination of sluggish demand and a further substantial easing in input price inflation. Service sector input costs rose at the slowest pace for ten months, while manufacturers’ input price inflation eased to a 20-month low, taking the overall rate of increase across both sectors down to the weakest since February of last year.

Which means, Monsieur Trichet and his team have even less justification than previously for proceeding with their ridiculous rate increase programme. It is now very unlikely that we will see any more of these in 2011, and an even bet whether the next move will be up or down. 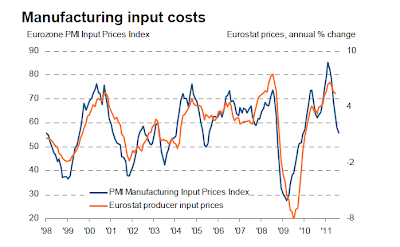 China Hovers In The Limbo Between Growth And Contraction

Finally, moving briefly on to the Chinese reading, conditions seem to have improved slightly in August, and even the decline in export orders was to some extent arrested, but it is far too soon to draw any definitive conclusions on this count. 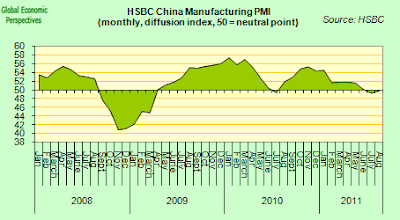 “The flash manufacturing PMI reading picked up slightly to a level close to the break-even mark in August, which is still consistent with around 13% y-o-y IP growth. Despite the turmoil in global financial markets, the new exports orders index rose to a three-month high, albeit still marginally below 50. All these data suggest that the hard landing risk is still remote. This provides leeway for the PBoC to keep the current tightening measures in place.”