What Is The Risk The Euro Crisis Will Reignite?

The euro zone crisis is not back -- at least not yet.

Recent movements in global markets following concerns about Portugal’s Banco Espirito Santo really had as much to do with market nerves after a long spell of repressed volatility as it did with the state of the bank’s balance sheet. Despite the current calm, everyone knows that volatility will return one day, and no one wants to be caught on the back foot when it does arrive. So the initial response is to hit the “sell” button and then ask questions.

Beyond this context, there is a lack of certainty in the market about which way bond yields for the so-called “peripheral” euro zone countries are heading in the near term -- and what exactly the risks associated with holding them really are. Riding the yield compression, in the case of the Portuguese 10-year bond from over 7 percent to under 3.5 percent was a one-way-bet no-brainer once the impact of Draghi’s July 2012 speech became crystal clear.

But now yields have started to tick up again, so the advantages of holding in anticipation of further declines become less obvious, while the risks continue to mount. In many ways, the situation is analogous to yen depreciation and the Bank of Japan. The first leg was easy, as the yen fell into the 100 to 105 to USD range. But now it is stuck there, and the debate has become a “will she, won’t she” on further BoJ easing.

It is clear the recent European Central Bank decision to launch Targeted Long-Term Refinancing Operations has disappointed. TLTRO's may do something to help ease access to credit in the south in the mid-term, but they will hardly be effective in combating deflation. In particular, we may need to wait more than six months to see any net liquidity impact, since the September and December allocations coincide with earlier LTRO repayments, leaving what Pantheon Macroeconimcs’ Claus Vistesen calls “a potentially worrying ‘air-pocket’ over the next six months where the central bank’s balance sheet continues to contract, making the verbal commitment to easing increasingly difficult to rely on as a sole back-stop."

Will we really have to wait till 2015 to see any significant step to try to stop the deflation rot?

Digging deeper, and beyond fears about what the coming ECB bank stress tests may turn up, the simple passage of time in itself could complicate things. The recent round of  numbers has had everyone busily revising down their 2014 growth forecasts, and it is obvious that even if outright deflation is avoided inflation will be very, very low. In fact whether or not the Euro Area slumps back into outright recession or not seems to depend more on Vladimir Putin than on the ECB at the moment,

But the key point to take away from all this is that nominal GDP over the next couple of years may barely increase, with the knock on consequence that sovereign debt levels in the most indebted countries will surely be jolted onwards and upwards. This is important since all official sector projections have these levels peaking either this year or next, but now these estimates will surely need to be revisited.

Second quarter GDP data was horribly bad. France's economy stagnated, but more worryingly for policymakers Germany relapsed (minus 0.2 q-o-q), leaving Spain as the only one of the "big four" to put in a positive growth performance (0.6 q-o-q). While the immediate drag on short-term growth may well be the impact on sentiment of a crisis on the frontier between Ukraine and Russia,  the Euro Area  is now clearly stuck in some form of longer term secular stagnation. The daylight just around the next recovery corner argument rings hollower and hollower with each successive loss of momentum.

"Europe is becoming Japanese" is an expression you hear more and more. People saying this normally point to the fact that German 10 year bund yields have now gone under 1% (and hence have started to look like 10 year JGBs). 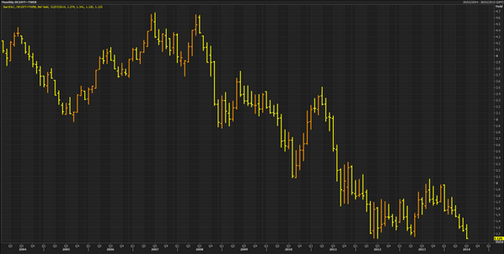 But behind this argument lies some sort of version of "reverse causality". In Japan JGB yields have been driven to very low levels by central bank intervention, with the BoJ now buying a very large share of all new issue. The ECB isn't buying Euro Area sovereigns, the markets are in anticipation of QE.  So to talk about the Japanification of Euroa Area yields is a little misleading. Bond purchasers and their models are PROVOKING this downward lurch, not weak growth or deflation. To push Mario Draghi into QE markets would need to move back into risk-off mode on periphery assets. As long as the bond markets remain well behaved Draghi will do as little as possible, as I will discuss below.

Another argument used to justify the "Japanisation" of the Euro Area idea carries much more clout, and that is the one being used by Paul Krugman based on working age population dynamics. 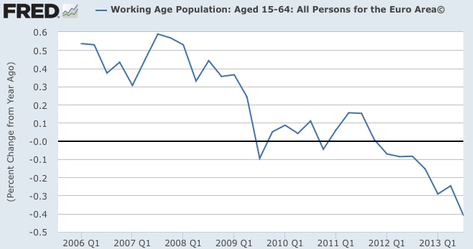 "If you’re worried that secular stagnation might be depressing the natural real rate of interest — the rate consistent with full employment — and you think that demography is a big factor, Europe looks really terrible, indeed full-on Japanese."

The basic idea is that working age population dynamics play a big part in determining movements in aggregate demand and hence inflation (see my secular stagnation summary here). This idea received support from a research paper published at the start of August by a group of IMF economists - "Is Japan’s Population Aging Deflationary?" (authors Derek Anderson, Dennis Botman and Ben Hunt). The first part of the abstract runs as follows:


"Japan has the most rapidly aging population in the world. This affects growth and fiscal sustainability, but the potential impact on inflation has been studied less. We use the IMF’s Global Integrated Fiscal and Monetary Model (GIMF) and find substantial deflationary pressures from aging, mainly from declining growth and falling land prices. Dissaving by the elderly makes matters worse as it leads to real exchange rate appreciation from the repatriation of foreign assets. The deflationary effects from aging are magnified by the large fiscal consolidation need."

Bottom line, despite all the denials from Mario Draghi that the Eurozone is not another Japan there are plenty of grounds for thinking that it will be.

So Which Way For The ECB?

Evidently members of the EU Commission, ECB governing council members, and senior political leaders in Berlin, Amsterdam or Paris are neither theoreticians nor intellectuals. The secular stagnation hypothesis is at this point more akin to a theoretical research strategy than a workable template for policy-making, and policymakers are understandably reluctant to take decisions on the basis of what is still largely a hypothesis. As the editors of a recent book on the topic put it in their introduction: "Secular stagnation proved illusory after the Great Depression. It may well prove to be so after the Great Recession – it is still too early to tell. Uncertainty, however, is no excuse for inactivity. Most actions are no-regret policies anyway". As they suggest the risks here are far from evenly balanced. If countries like Japan, Italy and Portugal are suffering from some local variant of one common pathology, then normal solutions are unlikely to work, and matters can deteriorate fast.

Naturally the ECB can go down the Abenomics path, and institute large scale sovereign bond purchases even while the Commission turns an increasingly blind eye to higher deficit spending at the country level. But it is far from clear that Abenomics works (see here) and if it doesn't what happens to all the accumulated debt? 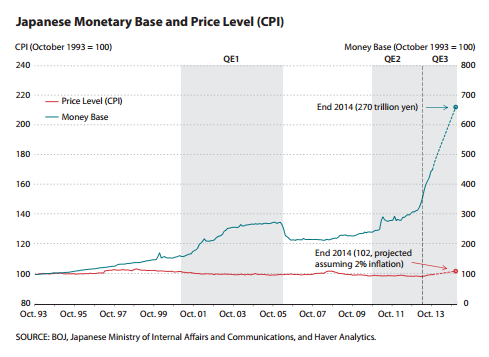 On the other hand time always has a cost. Letting things drift further means letting debt levels rise, and risking testing market patience and this becomes especially important in the cases of Italy and Portugal. The longer time passes the more difficult it is going to be for anyone to convince themselves that the debt of these countries is sustainable.

So there may come a point after which the Germans simply will not allow Draghi to buy Italian bonds without a prior haircut (see my "Italian Runaway Train" here). OK, they've said they won't do more PSI, but they've said a lot of things, and the cost of irritating investors is limited when you have a regional current account surplus and a central bank buying bonds.

Maybe the costs of the Euro "widowmaker" trade will be borne by all those eager bond purchasers who thought nothing could possibly go wrong. I am sure German politicians would decide a loss of credibility on PSI would be less costly to them than getting German taxpayers on the hook for current Italian debt levels. Especially in a country where they are now proudly announcing they have reduced government debt for the first time in more than 50 years. So in this case, maybe the turkeys just did vote for Xmas.

The thing is, despite the meeting between Draghi and Renzi (who may also be a turkey by Xmas) nothing substantial is going to happen in Italy. The government is under no pressure to ask for help (and doesn't even feel it needs it), and Draghi won't act before things change. Gridlock - with rising debt.

Naturally in the short term the “Mario Draghi ultimately has my back” feeling will still prevail, but with markets continuing to finance debt levels that any official study will soon have to recognize as unsustainable lack of proactive policies from the ECB will only fuel concerns that the size of the pill may become just too big for the bank to persuade Germany comfortably swallow, leaving the specter of private sector involvement to once more rear its ugly head. How do you tell people who have just sacrificed hard to get their debt under control that they are now about to help "pardon" 50% of someone else's. It simply doesn't make sense.

These arguments are developed at greater length in my new book "Is The Euro Crisis Really 0ver? - will doing whatever it takes be enough" - on sale in various formats - including Kindle - at Amazon.