The Polish Economy: An Unlimited Need For People? 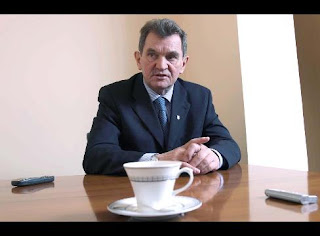 The gentleman in the photo is Konrad Jaskola, Chief Executive Officer of Polimex-Mostostal SA, Poland's biggest construction company, and according to this article in Bloomberg, he has just one message for us all: "I have an unlimited need for people".


The issue arising is that Joskola has plans to hire "several thousand" new workers next year to meet demand for new bridges and factories, but he has a problem, and the problem is that due to Poland's growing labour shortages he may have difficulty finding them. Poland's economy has been growing strongly in recent quarters, although not as strongly, it should be noted, in some of the more evidently "overheating" economies like the Baltics. Poland's economy expanded an annual 6.4 percent in the third quarter of 2007, following 6.7 percent growth in the second quarter and 6.8 percent in the first one, according to data released by the Warsaw-based Central Statistical Office at the end of November. 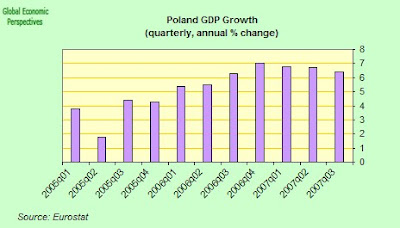 This strong growth rate is partly fueled by construction activity and partly by strong consumer demand for retail items like cars and washing machines. Construction in Poland rose 20 percent in the first nine months of 2007, and as can be seen in the chart below - which offers a breakdown of Polish GDP growth by components, construction has been playing a very important part in the process. The thing is, however, that construction activity is pretty labour intensive. 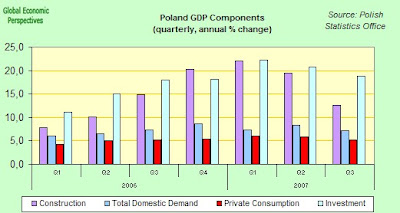 According to Joskola, Polimex needs to offer higher salaries across the board, to engineers and managers, and to on-the-ground site workers, as Poland's skilled workers steadily move abroad (like all that hedge fund money which is flowing in the opposite direction) in search of higher yield. As a result local competition for workers increases, and wages start strong upward climb. Polimex has raised wages by 11 percent over the last 12 months and plans to raise them them by a further 10 percent next year.


The company, which is a "recycled" formerly state-owned machinery supplier, established to drive Poland's post-World War II reconstruction effort, currently plans to spend as much as 200 million zloty on acquisitions next year, in order to add workers and production capacity. I imagine some, at least, of those acquisitions will have to be of workers coming from outside Poland.

Inflation On An Upward Path

Meantime Polish inflation accelerated to the upper end of central bank's target range in November on the back of higher food and oil prices, meaning policy makers at the central bank may be forced to raise interest rates again in the coming months, in so doing possibly pushing up the value of the zloty, and attracting even more funds in search of even more workers to put to work. 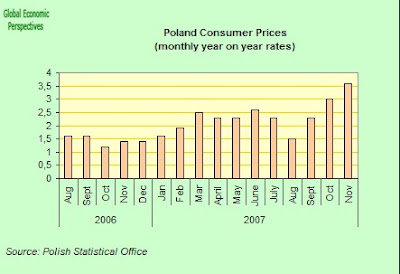 As Unemployment Continues To Fall 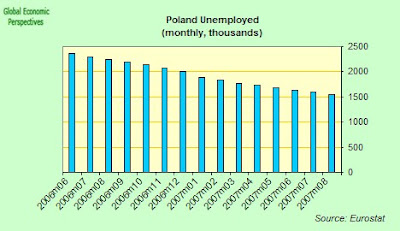 And Wages Continue To Rise

As I say, inflation in Poland is also being fed by a 10 percent average wage growth and record low unemployment this year. In fact Polish average corporate wages advanced in November at the fastest pace in more than seven years, suggesting that the very rapid economic growth and large scale out-migration of key age group workers may be squeezing the labour market more than people imagined, thus provoking the sharp rise in inflation. Wages rose at an annual 12 percent rate (and 4.8 percent from a month earlier) to 3,092.01 zloty, according to the Warsaw-based Central Statistical Office earlier this week. 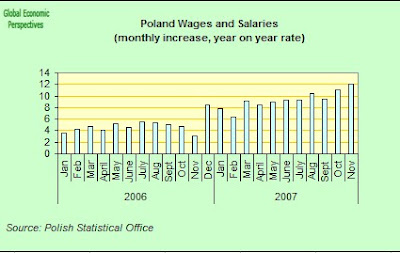 While Remittances Continue to Flow in Strongly

Remittances from abroad, mostly by taking advantage of free movement of labor within the European Union, are currently estimated (by the Polish National Bank) to be worth almost 2.5% of the gross domestic product of 250 billion euros. Since the United Kingdom opened its labor market to Poles three years ago, at least half a million Poles have settled in Britain.

Marcin Korolec, under-secretary at Poland's ministry of economics is quoted as saying that "the statistics show that the transfer from Polish people working abroad is something like 6 billion euros a year....Obviously this is a huge amount of capital, a huge amount of flow. It has an impact on internal consumption and internal growth." 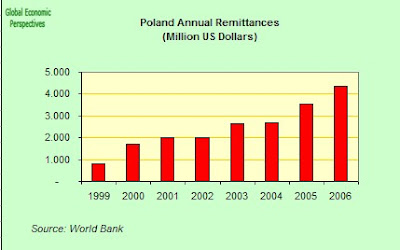 All of Which Produces A Rapid Rise in Sales

Polish October retail continued their rapid rate of annual increase adding to evidence that economic growth remains strong despite four interest rate increases from the Central Bank so far this year. Retail sales rose an inflation corrected 16.3% in October over October 2006, this was up from a 12.2% rise in September compared with 14.2 percent in September, according to the Warsaw-based statistics office today. 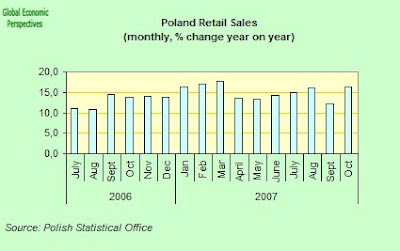 The growth which is driven by sales of vehicles (which rose 42% year on year) and sales furniture and household appliances (a 21.9% annual rate of increase) - confirms the impression that consumer demand is being bolstered by falling unemployment, which dipped to an 8 1/2-year low, higher wages, which last rose the most in seven years last month, and a steady and economically significant inward flow of remittances.


The central bank lifted the seven-day reference rate a quarter-point to 5 percent only last month, and this was the fourth increase since April, when the key rate was 4 percent. So as we can see, at this point of time , and against all traditional expectation, monetary tightening may actually be having the perverse effect of accelerating the economy. 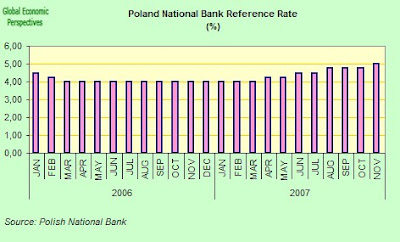 At the same time the zloty continues its rise, trading at 3.6150 per euro in Warsaw this morning following the release of this weeks wages data, thus holding near its highest level in five and a half years. It is strange that accelerating wage inflation should be read by the markets as good news, but still this is where we are, as investors anticipate rising interest rates and higher yields. Clearly this will continue until it no longer can. 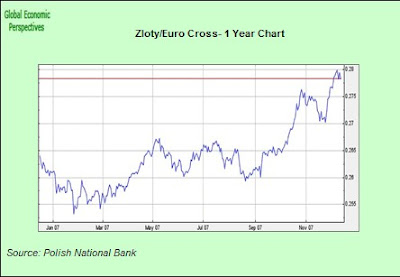 So as the Monetary Council begins its 2 day December meeting in Warsaw today, we can see that there are some difficult decisions out there to be taken. And, in a sign of the growing stresses and strains, members of the council have already made public some of their divergences, with policy maker Marian Noga taking the view that "The sooner we have the hike, the better, as preventive action is cheaper than boosting rates to chase down inflation", while Council member Miroslaw Pietrewicz holds that Poland's central bank should delay raising the benchmark interest rate until policy makers have had time to assess whether the four increases already made so far this year have been sufficient to bring inflation into check in the mid term.

What this dispute is a reflection of are the serious issues which arise concerning the actual ability of conventional monetary policy to work in a situation like the one facing Poland, since raising interest rates may just as easily stoke up more inflation - as we have seen in Australia and New Zealand, and to some extent in China - by attracting more investment funds into the country. This issue became apparent when the zloty also gained after a central-bank policy maker Marian Noga said the interest rate may have to rise as much as three-quarters of a percentage point before the end of 2008 to ward off inflation. Normally, an impending rise in inflation and a monetary tightening process (which reduces growth) would be considered to weaken and not strengthen a currency. So what happens next? Well this is just what we don't know, since we have never been here before. Clearly these economies will continue accelerating till the day they can't. And after that, well we will have to wait till we get there to actually see. What is happening in Hungary may give us some clues, and what happens next in the Baltics will definitely provide another of the missing links. Meantime we are in "wait and see" mode I feel. And behind Poland, roaring down the track come Russia and Ukraine, remember.
Posted by Edward Hugh at 4:18 AM

Blog is wonderful, an excellent layout.