Ok, well I have recently written extensively about the state of the German labour market, and why the recent drop in unemployment isn't everything it seems to be, why German wages have deflated, rather than inflated, during the current economic expansion, and why we may now be seeing reform fatigue setting in as the German economy once more slows. Here I am going to step back a bit from the day to day, and what follows will be an attempt to describe how the German economy, as we find it today, actually works structurally. 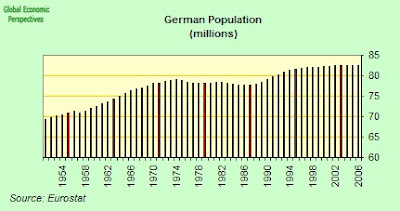 As can be seen, after the late 1990s the rate of population growth in Germany began to decline rapidly, and then more recently the population actually started to decline.

This changing population pattern has also been accompanied, as is again well known, by an important ageing of the population. This can be seen clearly from a chart - again from Claus - for German median ages: 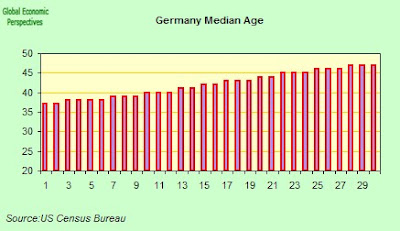 Now this rapid recent rise in the median age of the German population makes Germany a much older society than many other OECD countries. In particular the United States is much younger (as are the UK, France, Ireland, Iceland etc) as can be seen from a comparable chart for US median ages (again thanks to Claus). 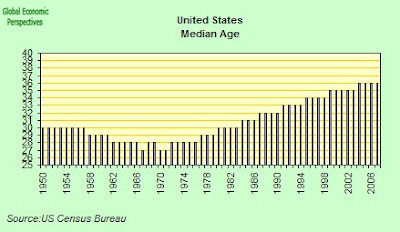 As can be seen the US is an incredibly young society, having attained median ages during the 1970s and 1980s more typical of a developing than a developed society, and even today the US is only where - in median age terms - Germany was some 30 or so years ago. So when we talk about "ageing societies" we should remember that while all our societies are ageing, some of them (Japan, Italy, Germany) are doing so much more rapidly than others. This difference in fact has profound implications, ones which were never foreseen, and given what we now know it should not be surprising to see these age structure differences expressed - as we will see below - in very different core characteristics in each of the societies concerned.

Now, not only is Germany's median age rising, the proportion of the population in the key 25-49 age group is now falling. Let's look at the chart: 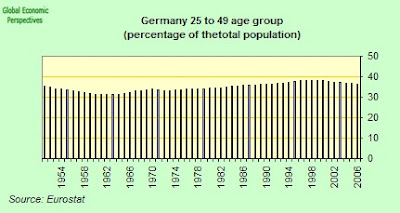 As can be seen from the chart this crucial age group touched its highpoint in 1997/98. This could be imagined as the moment of maximum capacity for the German economy. This is the case for two reasons. Firstly the 24 to 49 age group includes the crucial 25 to 49 household-former, first-time-homebuyer group. In terms of credit expansion, it is this group which drives a significant part of internal demand, since this is the group with the greatest propensity to borrow forward, and this is vital.

The 25 to 49 age group also includes another important group, the 35 to 50 one. It is this group which drives an economy in productive terms, since these are the prime age workers. So if you think of a society as a 100 metres sprint athlete, then there is an age when this athlete is at the maximum of his or her running potential, an age after which each time they can only run the 100 metres more slowly. Well a society is the same in terms of its collective economic potential, after the 25 to 49 age group peaks an economy can only move forward more slowly, and logically, since without addressing either fertility or immigration, every time more and more slowly, as this group declines inexorably as a % of the total population.

Is there any evidence for this kind of assertion. Well, yes, as it happens, there is actually.

Lets have a look at German GDP. First off a long term chart. 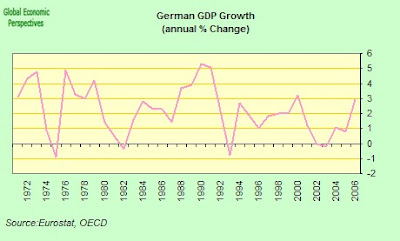 As we can see, and as is well known, German GDP growth has been very weak since the turn of the century. As is also well known 2006 was a very good year for the German economy, which is what lead all the commentators to cry - at last! There is a German recovery. But have they been too quick in drawing this conclusion? There are good reasons to think that they may well have been (and of course, in reality we are all about to find out as we go through the coming winter). Let's have a look at the evolution of the composition of German GDP over the years. 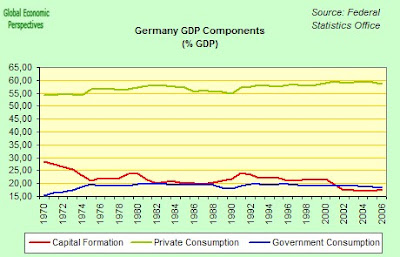 Now, there is a lot to be seen in this chart for the careful observer. The first thing that strikes the eye is the way private consumption has hovered pretty close to the 60% mark for many years now, while government consumption - after moving sharply upwards as a total share in the first half of the 1970s has subsequently remained pretty constant, moving around the 19% of GDP mark. The big difference has been in the importance of fixed capital formation (GFCF) which reached a local peak around the 22 - 24% of GDP mark - guess when - just when the 25 to 49 age group was reaching its historic peak, in the years 1992 to 1995. So why should this be significant, well quite simply since fixed capital formation includes the HOUSING share, and it is this component which has steadily declined as a share of German GDP since the mid 1990s, and which is why there is a "hole" in German (and Japanese, which is the same story, only told a little earlier) GDP, a hole which can only be compensated for by exports. It is now interesting to ask whether in Spain, where the age group in question has just peaked, and the property market may be in the process of a historic bust, we may not soon see the same process at work.

So what we could propose is the idea that the years between, say, 1974 and 2000 (when GFCF fluctuated around a more or less constant share of GDP) constitute - to use the language of neo-classical economics - the constant growth period of the German domestic economy. The years prior to 1975 were the convergence, or "catch-up" years - especially those of the 1960s, after Germany finally broke out of the destruction and devastation of WWII - while the years after 2000 constitute what the neo-classicists would call the "balanced growth period", although as we can see, growth isn't very balanced, and there certainly isn't a steady state. This is because the ageing population components in German growth are now coming to dominate over the shifting age structure components of the constant growth period, and we are seeing an effect which is very similar to what is known as the "demographic dividend", only it is acting in reverse, which is why I call it the demographic penalty. Basically the majority of economists want to argue that what I have just said isn't the case, but I would simply suggest they look at the data, as I have been looking at it, and explain why it isn't the case, since the facts and the correlates seem pretty clear to me, once you "parenthesise" (or put in brackets) traditional steady state growth expectations and take a fresh look at the data. Simply saying that what is happening, isn't (the denial stage) since that won't change things, and it would seem to me to be more sensible to accept reality and to devise policies which try to address the real issues.

If we now move on to look at exports we also find something interesting. While fixed capital formation declined as a share of GDP from 24% in 1991 to 17.76% of GDP in 2006 (ie a 6% drop), the German trade balance moved from a DEFICIT (yes, you heard right, deficit) in 1991 of 0.4% to a surplus of 5.44% of GDP in 2006, ie a rise of 6 percentage points. The comovement in the two shares match each other in virtually symmetrical fashion. Incredible, and facsinating, isn't it? Here is the time series chart for the two components. 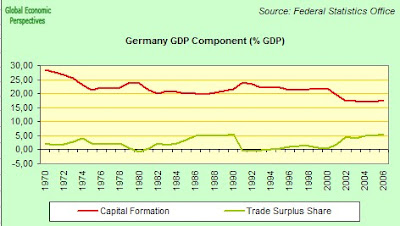 As I say, the correlation of these two since the mid 1990s is really quite striking. 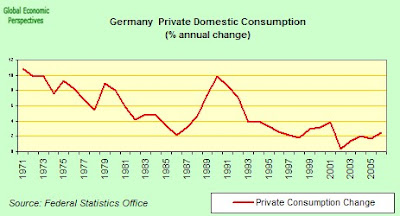 As can be seen, this has been - barring the boom years of the mid 1990s - steadily declining in its ability to drive German growth, and it would be rather foolish to expect this to suddenly change now. 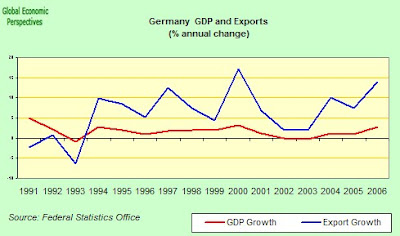 As can be seen, since the mid ninetees, every time the German export performance flags GDP tanks. Claus and I haven't gotten round to doing the correlation coefficients yet (but we will do). But the relationship is pretty clear, so if the markets in the US and Eastern Europe slow noticeably this winter, just you watch what happens to German GDP.

Or, if you prefer, "game, set, and bloody match". Anyone got some glasses handy, it's time to cork out the champagne I think. Or no, since this is Catalonia, a nice glass of Cava will do me fine. Have a nice day everyone. I will.
Posted by Edward Hugh at 12:18 AM