According to an intriguing article I read in Bloomberg recently an alert signal has been sounded due to the fact that house prices in the Scandinavian countries have been rising very rapidly of late. Judging by what they explain what is now going on in the housing markets of Norway, Sweden and Finland would seem to have all the hallmarks of a "mini-bubble", one which is all the more perplexing given the lowish level of economic activity which characterises the current environment. But then I asked myself, and those whopping German export numbers we saw in the second quarter, wheren't they also some kind of "mini bubble" which was quite out of keeping with what we should expect to be seeing.

Worse, if this seeming Scaninavian bubble were to pop, it could well send what has up to now been among the strongest regional rebounds on the whole European continent straight into a nosedive. In particular the Finnish problem interests me, house prices are rising steadily, and with them construction activity, even as the economy in general remains severely depressed following one of the sharpest output falls to be found in the Eurozone.

The central cause of the problem is not hard to pin down, it is to be found the widespread recourse to variable rate mortgages, which make activity in the housing sector (and through it the economy as a whole) highly sensitive to short term movements in interest rates . About 95 percent of mortgages in Finland and Norway follow money-market levels, while about 60 percent of Swedish loans are based on adjustable rates. This exposure to variable rates mirrors closely the situation in Spain and compares with that in Germany where some 90 percent of homeowners make fixed interest payments, or in France where the percentage of fixed rate mortgages is slightly less than in Germany but substantial nonetheless. Really I'm rather surprised that more of the experts on our financial systems haven't made this variable rate boom/bust behaviour connection during the recent debate.

Anyway what this flexible rate exposure means is that last the record low borrowing costs which are available in European money markets have simply fed straight into the Nordic region housing markets - where householders were not so deeply leveraged going into the crisis as they were in Spain or Ireland - and it has done so much faster than in it has in other parts of Europe. France would be the other country to watch (or Poland) but at least in France the central bank has a better hold on the situation via the insistence on a fixed rate mortgages policy.

And the situation is not to be laughed at: Bloomberg quote Finnish Finance Minister Jyrki Katainen as saying he is "very worried" since in his opinion “There could be a housing bubble in the making in Finland. There is a risk that mortgage borrowing costs are too low.” My feeling is that by the time Finance Ministers start talking about the problem it is already too late.

So, with my curiousity piqued, I duly went over to the Finnish central bank website where I found the following:

"Households’ new drawdowns of housing loans amounted to EUR 1.5 billion in August, up by 1% on July 2010 and 20% on August 2009. The average interest rate on new housing-loan drawdowns rose to 2.08% in August, from 2.03% in July. A typical housing loan drawn down in August was tied to a 12-month EURIBOR and had a maturity of 20 years. The stock of MFI housing loans to households grew by EUR 0.4 billion on July, to EUR 75.0 billion at end-August. The annual growth rate of the housing loan stock slowed to 6.7%, from 6.8% in July. The average interest rate on the stock of housing loans rose by 0.02 percentage point from July, to 1.96%".

So it is true, interest rates in Finland are ultra cheap (around 2%) and the stock of mortgages is rising by nearly 7% annually: not ulta high by historic standards, but we are in the midst of, well you know. Which takes me back to my last post on imbalances in the Eurozone, and what the ECB can do to prevent a situation like the one in Finland becoming a repeat performance of what happened in Spain or Ireland. 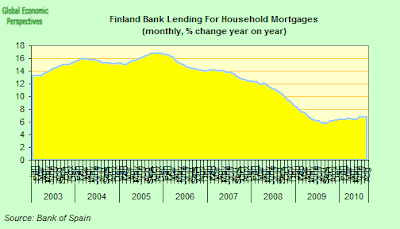 In Finland, existing flat prices rose by an annual 10 percent in the second quarter, after surging a record 11.4 percent in the first three months of the year. In Greater Helsinki the growth rate was 13.6 percent and in the rest of the country 7.0 percent. 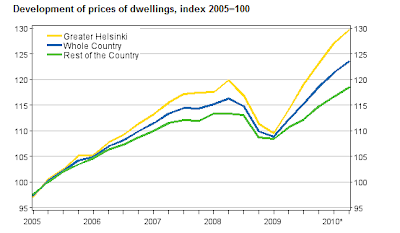 The situation with house prices is similar, since after a 1.5% fall in 2009 (with the price in large urban areas falling by as much as 8.7 percent they are now back back on their way up again. 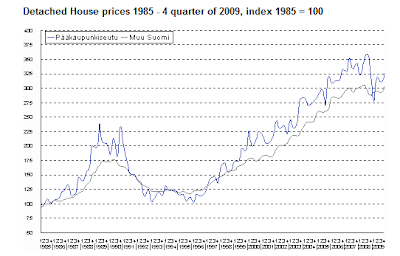 And the pressure is mounting, since household debt in Finland rose to 107 percent of disposable income at the end of last year - up from 65 percent in 2000. Which means that any significant rise in interest rates at the ECB could see many of those with mortgages having difficulties maintaining their monthly payments.

What is even more curious is that all of this is taking place even while the Finish economy is a long way from emerging from the deep hole into which it fell. Finland’s GDP is expected to grow by 1.5 this year, following last years 8 percent contraction, according to a government forecast which does not seem totally unrealistic. But if we look at the chart below, which shows the GDP indicator produced by the Finnish statistics office, there is still a very, very long way to go to get back to where we were. 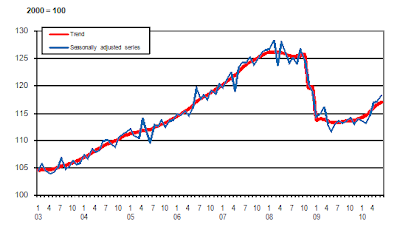 Yet despite this, consumer confidence is at what are effectively record levels. 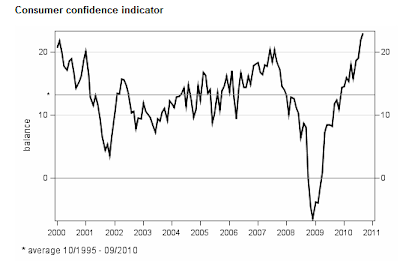 So with all this money going into construction and consumption the Finnish economy is starting to suffer from structural distortions (heard about that before somewhere, have we?).

Retail sales have more or less recovered, and are now steadily moving above their pre crisis level. 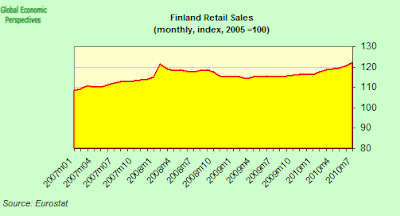 But industrial output is remains way down (in July it was still 23 percent from peak, and even showing signs of falling back).

And Finnish exports have completely failed to recover. 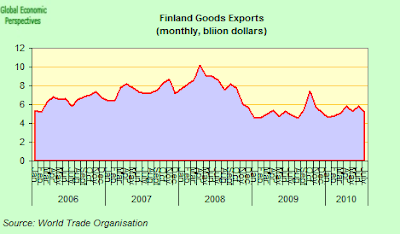 A feature which is very clearly reflected in the trade balance, which is now very near to turning negative. Competitiveness problem anyone? 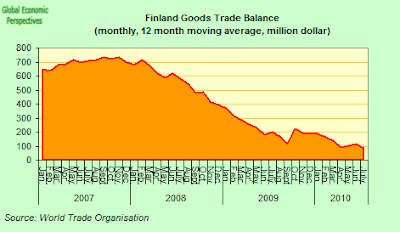 What is quite surprising is that while Finnish industry did pretty well at maintaining its price competitiveness up to 2007 (if we look at the REER chart below), it seems to have losy considerable ground in 2008 and 2009 (ie during the crisis, which seems to suggest "rigidity" rather than "flexibility"), and, of course, (to repeat the old mantra) it can no longer devalue to make an "easy" correction. So it looks like it is going to have to follow its Baltic neighbours down the hard road of a long slow internal devaluation, and especially after the bubble bursts. 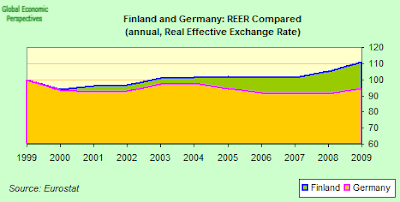 Of course, as others have already pointed out, this isn't simply a Euro problem, since neither Sweden or Norway are in the Euro, and they are also struggling to contain their housing markets. They are typical problems faced by a small open economy in an environment of massive external liquidity. Evidently, as Roubini Global's Mikko Forss says, tighter regulation from the Bank of Finland would have helped (I fear it is now really too late for this to be effective in the timeframe available) - controlling loan to value ratios, limiting variable rate mortgages, raising income-to-loan parameters, etc. As things stand, the main short-term threat to Finland would seem to come more from a premature raising of rates - which would surely burst the thing - rather than from keeping interest rates lower longer, and trying to implement some emergency measures.

Obviously it is hard to convince a country which has just had such a sharp drop in output that even a 3.8% fiscal deficit is too high in a situation where consumer credit demand is leading the economy to become increasingly distorted, but if its pain you are worried about, then maybe a short term dose is a lot better than ending up where Spain and Ireland are. Without monetary policy tools available all the authorities can do is impose regulations and use their own fiscal spending to regulate demand. And inflation expectations and credit demand are both on their way up. According to the September consumer confidence survey, Fins expect consumer prices to increase by 2.6 per cent over the next 12 months. One year ago the predicted inflation rate was 1.6 per cent, and its long-term average is 2.1 per cent. And when asked about their borrowing intentions, 71 per cent of those questioned stated they thought this was a good time to raise a loan, while in August the proportion was 64 per cent. Hardly a surprising result, with interest rates pinned to the floor, and inflation expectations rising.


So the Finnish economy does seem to be poised on the edge of some sort of cliff, and one day or another it is likely to fall. And it is precisely the existence of problems like these in a country like Finland (far from the Mediterranean beaches and sun) which leads me when thinking about the problems we have on our hands to prefer the expression Europe's periphery (from Ireland to Finland to Latvia to Hungary to Bulgaria to Slovenia to Greece and Spain and Portugal) rather than the over narrowly-focused (and somewhat abusive) term PIGS. But whichever way you look at it, and whatever you want to call them, there are a growing number of countries inside the EU who face mounting rather than subsiding problems at this point.
Posted by Edward Hugh at 12:00 AM