Just to follow up on my recent long Estonia post, a couple of new data points have caught my attention recently: the sharp rise in Estonian inflation and the ongoing goods trade deficit.

In the first place it is worth noting that Estonia's trade deficit went UP again in August. Of course, the countries ongoing services surplus takes some of the edge off, by, since Estonia is now an export driven economy, to return to stable growth and create that much needed employment Estonia needs a trade surplus, not a deficit. Of course, the headline catcher is that August's export were up 37% over August 2009. The number looks a little less impressive when you notice that imports were also up by 34%, and take in that a significant proportion of exports are imports which are re-exported, and then you look at the chart (below) and see that both are still running at levels well below their pre crisis peaks. 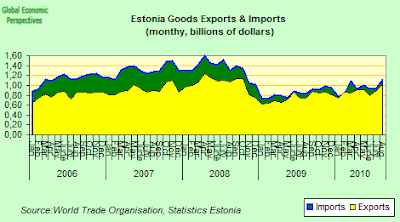 To add insult to injury, despite the rapid export rise, Augusts trade deficit - some 71 million euros - actually increased slightly when compared to August of the previous year. 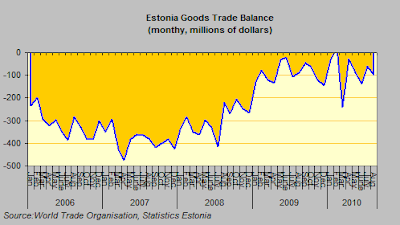 And here's the smoking gun which can help us understand why, despite the legendary "internal devaluation, the underlying Estonian trade deficit continues: the ongoing surge in inflation, itself in large part a by-product of the tax increases and energy subsidy reductions made to keep the fiscal deficit under control .

According to Statistics Estonia, the consumer price index was up by an annual 4.0% in September, and by 0.8% when compared to August this year. Goods were up 4.5% and services 3.0%. Food prices were part of the problem, since they were up 7.0%. But, as the statistics office report informs us, government administered prices of goods and services were up by 8.1% while non-regulated prices were only up by 2.7% - that's the giveway datapoint, I think.

So inflation is rising, but even worse, so too are inflation expectations.

Inflation expectations by Estonian consumers continued to rise in September, according to Konjunktuuriinstituut, an economic research institute in Tallinn. The outlook is “certainly” affected by the prospect of euro adoption, the institute said.

Thirty-five percent of consumers polled by the institute this month expect inflation to accelerate in the next 12 months, compared with 32 percent in August, and 5 percent a year earlier, it said. 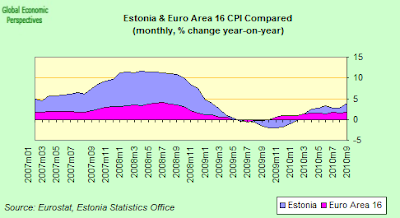 So, if those taking the policy decisions aren't careful Estonia may be about to loose its "poster boy" image, and find itself added to the ranks of the "fallen angels". The above comparison of Euro Area 16 and Estonia CPI inflation makes it look awfully like the timing of the tax and subsidy changes was calculated to get good inflation readings during the key euro decision window. It is hard to believe that neither the central bank nor the ECB could see the current surge coming - or if they couldn't, then the best you could say is that they were extraordinarily incompetent in their handling of the issue. And if you look at the competitiveness loss the price index reveals since the start of 2007 (even) the short period of deflation has nowhere near compensated for it, and the current price surge will soon eat it what little competitiveness improvement there has been all away.

Of course, the central bank has expressed some concern, “There is a threat the present price and wage levels will not sufficiently support new investment and job creation,” it said in its latest economic report, although it stressed that it considered the increase in ongoing inflation due to rising food prices is likely to be temporary.

All of which only confirms my impression that the Estonia entry decision was made in haste, coinciding as it did with May's sovereign debt crisis. The decision was a kind of vote of confidence in the resilience of the Euro Area: "look, we aren't about to fall apart, we're even accepting new members". In fact ECB President Jean-Claude Trichet almost said as much on a recent visit to Tallinin. Europe's economic and monetary union is committed to accepting further members, he stressed. "The euro area is not a closed shop," M. Trichet said, while attending a festive event to celebrate Estonia's upcoming accession to the eurozone. Rather, he said, it is open to any country "that fulfills any of the preconditions in a sustainable manner."

The keyword here is "sustainable". As reported on this blog, there were those within the ECB, and most notably ECB executive director Juergen Stark, who opposed the decision, by simply arguing that, in the light of Greece's inability to endure the discipline of EMU membership, future applicants should be screened more tightly. In the past, membership had rested on the ability to conform with numerical targets on inflation, public debt and exchange rate at a specific point in time. Stark spoke of the need for countries to demonstrate that their compliance with the entry criteria is sustainable beyond the snapshot moment. As we can see, at least in terms of inflation, it is very hard to argue that Estonia's economic performance is.

Jean-Claude Trichet also took advantage of his visit to stress that Estonia must remain “alert” on price developments and take “forceful” action to stem inflation after joining the euro-region economy. But, understandably, Prime Minister Andrus Andrip replied that Estonia is now going to have relatively “few tools” to control price increases. The main technique available is to run a fiscal surplus to drain demand, but with an economy which is suffering from the level of output loss that Estonia's is this is hardly contemplateable.

Basically it would have been much more advisable to resolve these issues before joining the euro, but now it is a little late for that, so, who knows, maybe Estonia will eventually become the first candidate for the recently proposed EU imbalances surveillance mechanism.

As the press release puts it: "The global economic and financial crises, followed by the so-called debt crisis, exposed the need for reinforced economic governance in the Economic and Monetary Union (EMU). Economic policies need to be better co-ordinated and surveillance enhanced".

"Surveillance would start with an alert mechanism that aims at identifying Member States with potentially problematic levels of macroeconomic imbalances. The alert mechanism would consist of a scoreboard complemented by expert analysis".

"The scoreboard would be composed of a set of indicators in order to identify timely imbalances emerging in different parts of the economy. The set of indicators should be sufficiently large to cover any possible case of major imbalance and making sure that it is sufficiently sensitive to detect imbalances early on. Possible indicators would most likely include both external (e.g. current accounts, real effective exchange rates) and internal ones (e.g. private and public sector debt). The composition of the scoreboard may evolve over time due to changing threats to macroeconomic stability or advances in data availability".

"Alert thresholds would be defined and announced for each indicator. The thresholds should be seen as indicative values which would guide the assessment but should not be interpreted in a mechanical way. They should be complemented by economic judgment and country-specific expertise".

But looking at that rising inflation profile, and thinking of Prime Minister Ansips statement that the country has few tools left with which to tackle the problem, whoever would have thought that just a few short years ago Lithuania had its application to join the Euro turned down simply because its inflation wasn't considered to be sufficiently under control. My, my, how things change.

On account of its 2.63% March 2006 inflation, Lithuania has for now failed to qualify for the euro zone, while Slovenia is all set to adopt the euro in January 2007.

According to Monetary Affairs Commissioner Joaquin Almunia, the criteria, laid down in the EU's Stability and Growth Pact, are there to be rigorously enforced.