Japan Inflation At A 32 Year High?

Just in case anyone was in any doubt last weeks newspaper  headlines blared it out for us loud and clear - Japanese inflation is back, and has even hit levels last seen in 1982. (Click on image below for better viewing).

In fact consumer prices in Japan rose at an annual rate of 3.4% in May according to the Bank of Japan's preferred measure, driven higher from one month to another by the growing impact of the April sales tax hike. The May surge in inflation follows a previous jump to 3.2%  in April, up from 1.3% in March. Apart from the tax hike, the delayed impact of last years yen devaluation is still being felt: electricity charges rose 11.4% year on year in May, gasoline was up 9.6%, while fresh seafood prices climbed 14.3%. 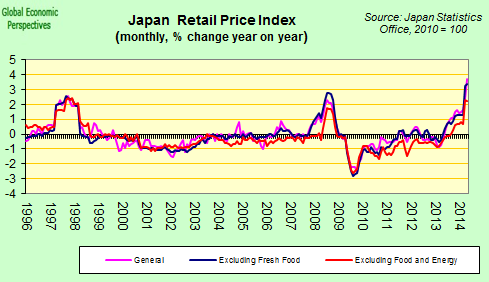 However, stripping out the effect of the higher tax, Japan's core consumer-price index rose 1.4% in May according to statistics office estimates (see BoJ chart below), below the 1.5% increase the previous month. This underlying inflation fell, even while the headline core index rose, which is why I say the "growing impact" of the tax hike, since it is clear that businesses passed on more of the tax rise in May than they did in April. The slowdown in price growth was the first since September 2013, and BoJ governor Haruhiko Kuroda also recognized last week that ex-tax core inflation is "expected to slow to around 1%" in the summer, as the effects of higher imported energy prices diminish. 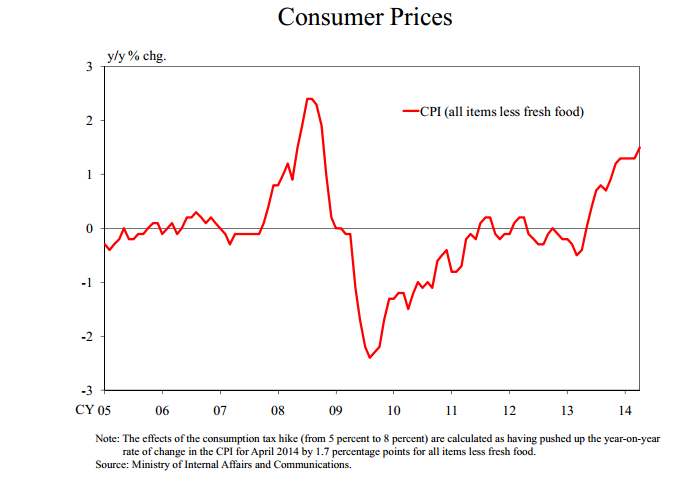 But beyond the waning impact of rising energy prices, a second factor is likely to put downward pressure on Japan prices: the continuing shortfall in domestic demand. Household spending was down 8% year on year in May, following a 4.6% drop in April. 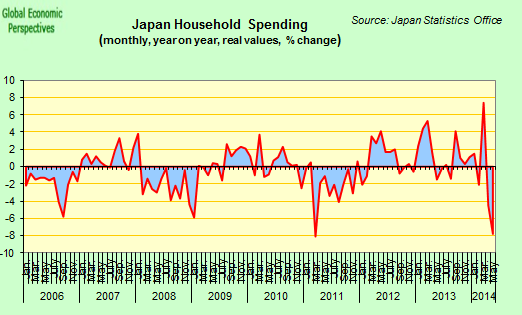 And it's not hard to fathom why consumption is so weak: wages excluding overtime payments and bonuses fell for a 23rd month in April. In fact real wages fell 3.8% year on year. With the purchasing power of salaries falling, and weak demand for credit it is hard to see how consumption wouldn't be falling - maybe not as sharply as in May, but falling all the same. 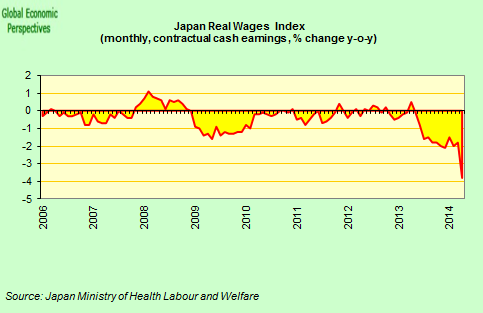 On the positive side,  Japan's unemployment rate hit a 16-year low of 3.5%  in May. At the same time, the availability of jobs rose to its highest level since 1992, with the jobs-to-applicants ratio for May hitting 1.09, meaning there were 109 jobs available for every 100 job seekers. The data showed the job market tightening across the economy, from construction to auto manufacturing to education. 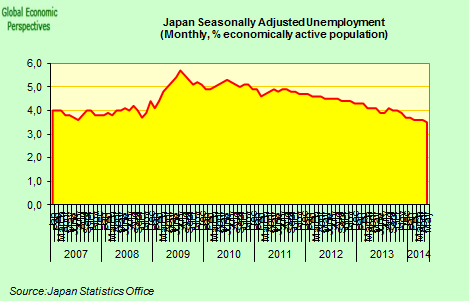 In fact it isn't just unemployment that is falling - employment is also rising, and was up by just over half a million workers over the last twelve months taking the number of jobs in the economy to a post crisis high. 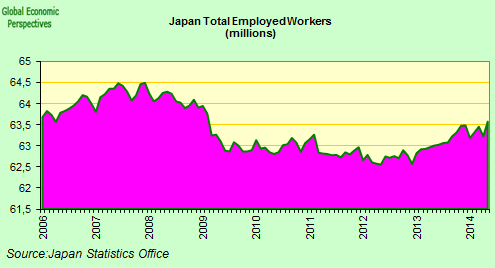 But if the number of people employed is rising, why isn't what Prime Minister Abe calls the "virtuous cycle" starting to work, with jobs growth producing income growth to spur consumption, so lifting corporate profits and investment spending? Part of the answer lies in the kind of jobs being created. The growth in the number of workers on short-term or part-time contracts means that total earnings (as opposed to basic wages) across the economy are not rising. Employment was up 0.9% while disposable income among worker households FELL 3.4% in real terms. The numbers just don't add up. 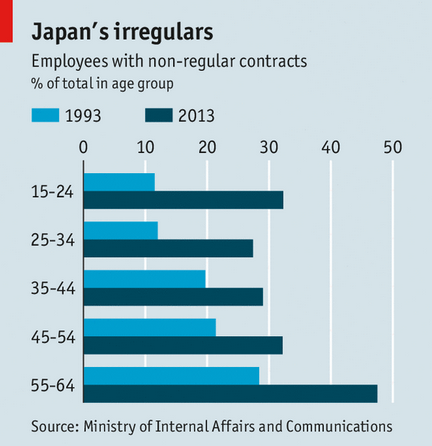 As the Economist (who prepared the above chart) puts it, "workers used to be protected by an expensive system of lifetime employment. But firms place new entrants on short-term, ill-paid contracts. Nearly two-fifths of the workforce now falls into this “irregular” category."

The Price Of Permanent Stimulus

Nothing, as we know, comes free, and Abenomics is no exception. Apart from the problem of inducing consumption on the back of falling real wages, the country's external balances are also suffering.  Japan logged its 23rd successive month of trade deficits in May, as exports and imports both declined. The May deficit  was 909 billion yen ($8.8 billion), as exports to the U.S. fell by nearly 3 percent from a year earlier. Exports fell 2.7 percent to 5.6 trillion yen ($54.9 billion) while imports dropped 3.6 percent to 6.5 trillion yen ($63.7 billion).

All this notwithstanding, with the Bank of Japan buying almost all new issue Japan Government Bonds, yields remain incredibly low. As the FT's James Mackintosh points out the yield on the 7-year bond fell to just 0.28% last week, only 6bp above its all-time low. 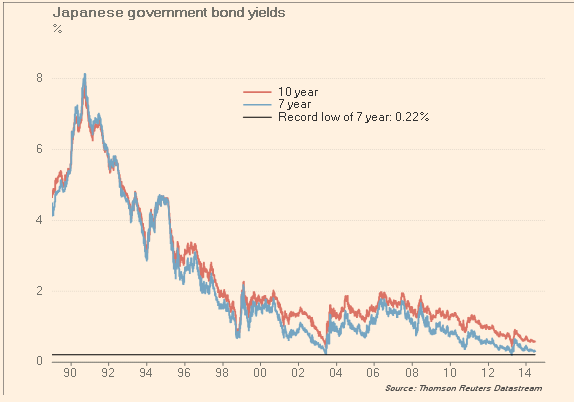 As James notes, rising inflation and falling bond yields don't mix well in the longer term, and don't offer much prospect of a serious market beyond BoJ purchases, unless of course the inflation is not sustainable.  The black line in the following chart shows an index of inflation-linked JGB real yields, while the other two show the 7- and 10-year yields minus inflation. 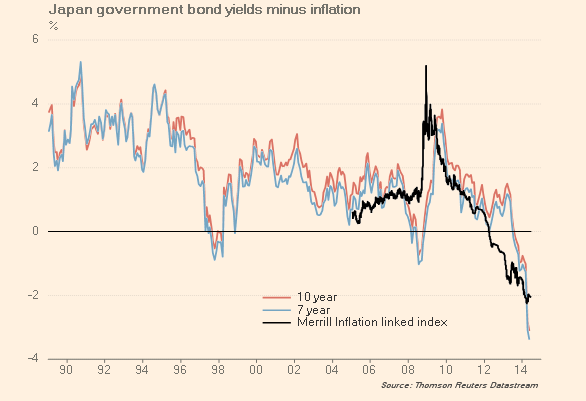 Really there isn't that much mystery about what is going on in Japan. Falling working age population is steadily reducing the country's potential growth rate (as the chart below from the Bank of Japan illustrates), and while structural reforms may help raise productivity and offset the decline on the supply side to some extent, they won't address the underlying structural demand shortage problem. So it could be that at the end of the day the only lasting legacy of the Abenomics experiment will be a seriously distorted economy and a pile of sovereign debt which will be hard to ever pay down and will make raising interest rates in the longer term really problematic. 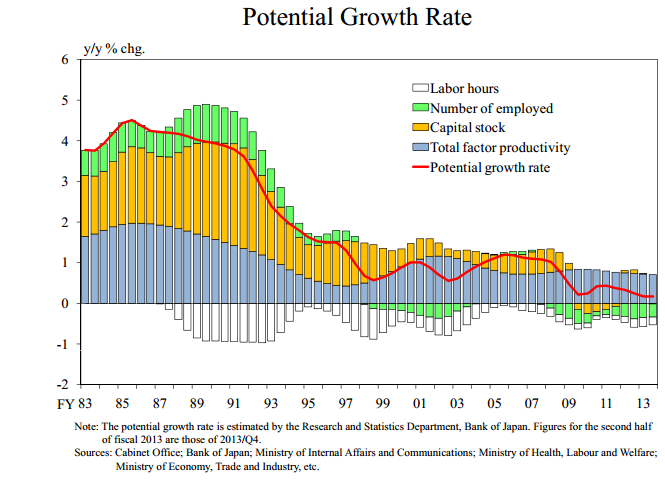 More detailed arguments to justify the idea that Abenomics is unlikely to achieve its objectives can be found in my recent short book - The ABE of Economics (for more information visit my webpage). The book is available with Amazon as an e-book. It can be found here. You don't need to buy a Kindle to read this book. You can download a free app from Amazon.