Will Japan Re-enter Deflation in April 2015?

Reading the most recent statements from Bank of Japan Governor Haruhiko Kuroda or Finance Minister Taro Aso you would get the impression that the days of deflation are now well and truly numbered in Japan. Martin Schulz, economist at Fujitsu Research Institute in Tokyo, goes even further. “Deflation is over in Japan,” he told Bloomberg Television First Up’s Angie Lau . Even Japan’s industrial leaders now believe inflation is here to stay: the country’s inflation rate will be 1.5 percent in the spring of 2015, and 1.7 percent in 2017, according to average forecasts in a Bank of Japan survey conducted in March this year.

But is such optimist justified? According to the Bank of Japan's favored index, which includes energy but not the cost of fresh food, inflation stood at an annual 3.2% in April. Sounds good if what you want to do is generate inflation. 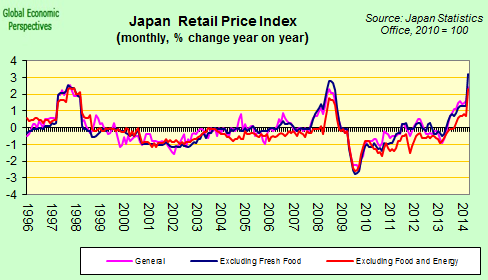 But before getting too excited, it is worth bearing in mind that inflation one month earlier has stood at only 1.3% on the same measure. The difference between months is, naturally, the result of the impact of the 3% sales tax hike which came into force on 1 April. Without that, inflation would have been much lower since the base effect of the 20% yen devaluation is now starting to work its way out of the calculation. Indeed stripping out energy costs (which are the principal knock on cost effect of the devalued yen), inflation in April was but 2.3%, notably below the size of the tax hike. So the question which should be being asked is what will the level of annual inflation be in April 2015, assuming that is there are no further yen devaluations or tax hikes to help push the number back up again? Analysts at Credit Suisse seem pretty clear (see chart below), we’ll be back in deflation again. 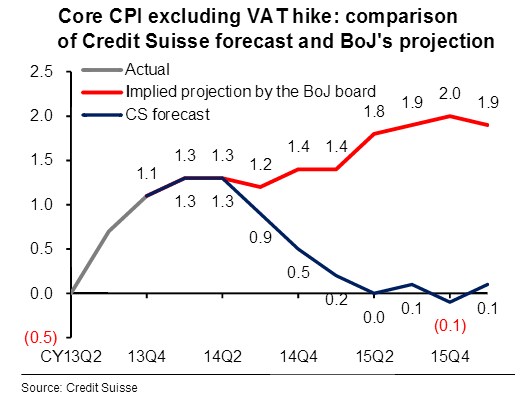 Leaving aside the sustainability issue, the type of inflation Japan has been experiencing since the advent of Abenomics – driven by rising energy costs and tax hikes – also constitutes a problem. It has been described by Bloomberg journalists Tsuyoshi Inajima and Brian Swint as the "wrong kind", a way of putting things which highlights the amount of confusion there is out there about just what it is that the BoJ is doing and what it is supposed to be achieving.

To back their point they cite Klaus Baader, chief Asia Pacific economist for Societe Generale in Hong Kong to the effect that “this isn’t the kind of inflation we want in Japan to break the deflation mindset. We’d like inflation that is a reflection of higher wages, whereas this is pure cost inflation that decreases purchasing power.” So now we learn that Japan doesn’t need just any old inflation, it needs a very specific kind, which could be described as “demand pull”, but this brings us straight back to the original problem: domestic demand in Japan just isn’t strong enough to generate this kind of inflation, and nudging up inflation expectations for a couple of years won’t change anything substantial in this regard. Possibly the type of cost push inflation Japan is experiencing is the "wrong kind" for adherents of the Abenomics approach, but it is more than likely the only kind they are going to get. If the structural lack of demand argument I have been advancing is valid, then this means there is permanent downward pressure on costs in an environment of constant oversupply making inflationary wage increases difficult to envision. Indeed, as reported by another group of Bloomberg journalists (Masaki Kondo, Mariko Ishikawa and Yumi Ikeda) , reality itself belies such expectations, since Japan's wage index hit a post 1992 low at the start of 2013. And the downward drift has continued. In April 2014 the average basic salary fell for the 23rd straight month, declining 0.2 percent to 243,989 yen, while average real, or inflation-adjusted, wages decreased 3.1 percent from a year earlier, marking the largest year-on-year fall in more than four years.

Rising inflation and falling wages don’t seem like the sort of combination to make for a sustainable recovery. Indeed it seems so off-mark as to make you wonder whether official sector economists really thought through what they were doing before embarking on this experiment.

The thing is this, given all the doubt which exists about the real roots of Japan's problem, and the fact that it may well be a permanent structural problem and not a temporary liquidity trap one, is it really justified to run such a high risk, all-or-nothing experiment? Even Paul Krugman seems to have changed his assessment various times since the  problem started and while he still fully supports the general approach being taken he now thinks the natural rate of interest may remain permanently negative and that fiscal stimulus might be necessary on a permanent basis (liquidity trap without end, amen).  What makes people nervous is the thought that if the central bank can't deliver on its promise to deliver inflation then a loss of confidence might ensue, and all those dubious risky asset positions might unwind suddenly, just like an earlier set did in 2008.

And there are plenty of people in Japan who have been pointing this out all along. Seki Obata, a Keio University business school professor for example, who in 2013 published a book "Reflation is Dangerous," argues exactly this, that "Abenomics" is exposing Japan to considerable risk without any clear sense of what it can accomplish. Obata also makes the extremely valid point that there is simply no way incomes can rise across the entire economy because the baby boomers are now retiring to be replaced by fewer young workers with post labour reform entry-level wages. Japan's overall consumer spending power will therefore fall, rather than rise as Abe hopes. "Individual companies may offer wage increases, but because of demographics it is simply impossible to increase the total amount that is paid out in wages," says Obata. "On the contrary, that amount will shrink." Simple logic you would have thought, but logic in the face of irrational exuberance scarcely stops people in their tracks.

As far as I can see, all of this  points to one simple and evident conclusion: that Japan needs deep seated cultural changes, especially ones directed to greater female empowerment and more open-ness towards immigration. Hardly matters for central bank initiatives, and indeed ones for which Shinzo Abe, who naturally has given his name to this new economic trend, is singularly ill equipped to carry through. Japan needs a series of structural reforms – like those under discussion around the third arrow – but these would be to soften the blow of workforce and population decline, not an attempt to run away from it. Monetary policy has its limits. As Martin Wolf so aptly put it, "you can't print babies".

The above is an extract from my new "mini book" the A B E of Economics.